Hey my mighty monkey minions !
As you can tell by the previous several posts, our illustrious founder of HGM has made his triumphant return after a long hiatus...Welcome back gorilla man !!!
I have also been missing for a while due to medical issues and other insane obligations...It's good to be back to titillate you with the latest and greatest Gorilla Men news !

First up is a great opportunity to participate in the production of a documentary about the American Tourister Gorilla himself, Mr. Don McLeod !
The documentary is the brainchild of Don's gorilla successor Adam Meir.
Adam has been Don's protege for several years now and has taken over the role of the American Tourister Gorilla !
Here are a few words from Adam himself about this fantastic project :


APE SUIT LOVERS!!!
We are excited to announce that Project Greenlight and Seed&Spark have accepted our film, "Top Banana - The Most Famous Unknown Hollywood Actor" into its Untold Story contest!
https://www.seedandspark.com/studio/top-banana#story
We have been working on this film for two years. It is about Don McLeod, suit performer, mime, Japanese Butoh artist, poet and philosopher. He played one of the best werewolves of all time in The Howling. He was the American Tourister (Samsonite) gorilla in the classic television commercials. Film credits include Trading Places, Hook and Total Recall, to name a few.
NOTE! If you can't contribute that's no problem. But PLEASE click the FOLLOW button. We need 500 followers and then we get matching funds from the company!

Bongo again kids.... Gorilla Man and I make it our mission to get these hard working , under appreciated fur clad geniuses into the spotlight to keep a historical record of the greatest apes Hollywood has to offer...And Don is one of the best !
When the American Tourister commercials first aired in the 70's, Audiences where 100 % convinced it was the real thing they were seeing demolishing lesser brands of luggage.
Of course the raging primate was thwarted by the indestructible construction of the American Tourister luggage .
The setup on the commercials was brilliant, the very first commercial was done with a real ape, though not a gorilla. The used an adult Chimpanzee for the job...Few people realize that the cute little chimps they see in movies and television are actually the equivalent of a human toddler. A full grown chimp is comparable in size to a full grown man !
Once the audience had seen this hirsute engine of destruction attempting to demolish the impervious luggage, the stage was set,
Enter Don Mcleod !

The commercial producers, realized they needed a star that took direction better than the rampant chimp, so brilliant mime Don McLeod was brought in to take over the role. ( he studied under the great Marcel Marsceau ! )
Don's skill as a mime made him ideal to convey the enormous power of a pissed off gorilla to tackle the luggage that defied all his attempts to destroy it. The producers also realized that while performance was the key,he also had to look absolutely real to complete the illusion.
This is where multiple Academy Award winning makeup effects legend Rick Baker got into the act.
Rick was no stranger to gorilla acting as he not only created the suit for, but also played the king himself in the 1976 Dino DeLaurentis production of King Kong.
Ricks skill in creating his gorilla suits, was just what was needed to complete Don's transformation from man to monkey !
Once Don was in the suit, he virtually ceased to exist !
So flawless was Dons performance, he was virtually indistinguishable from a living  breathing gorilla ! 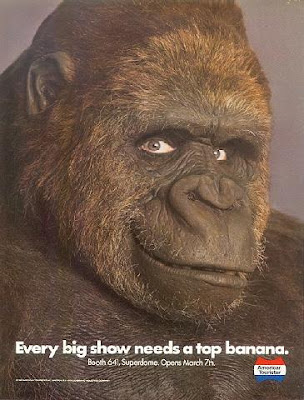 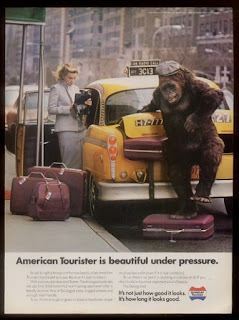 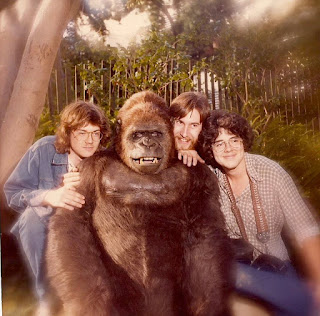 ( Rick Baker and crew pose lovingly with Don On the one of the American Tourister commercials )
The american Tourister commercials are emblazoned in the minds of anyone growing up in the 70's and 80's. Don continued his gorilla hijinx in such classic films as Trading Places (1983 ), The Man with Two Brains (1983 ), Born to be Wild ( 1995 ) and Mom Can I Keep Her ( 1998 ) playing a female gorilla ! 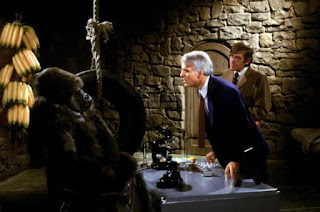 Dons most notorious outing as a great ape was in the 1980 production Tanya's Island.
Don's ape character "Blue" was an odd combination of gorilla, orangutan. and baboon.
Blue's main objective was to mate with Tanya, played by the stunning D.D. Winters. ( Vanity, Prince's former girlfriend ) 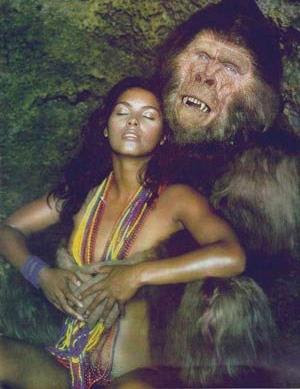 The "Blue" costume reunited Don with master creature effects artist Rob Bottin, after have worked together in The Howling . Blue's look was like no other ape ever featured in film, and the bestiality implications brought Tonya's Island into nearly instant controversy from zealot like morality groups.
Don's television performances have been no less impressive with feature gorilla roles in Tarzan: The Epic Adventures , Sheena, with Gena Lee Nolin, and The New Addams Family, stepping into the role of Gorgo the gorilla, originally played by HGM legend George Barrows !
So back to "Top Banana -The Most Famous Unknown Hollywood Actor".
This is an incredibly worthy cause for donating funds to help complete the film.
Our contributions have helped fund " Beast Wishes, the legendary Bob Burns biopic " and JL Barnett's  " Charlie Gemora : Uncredited ".
Every dollar counts, so please be part of this incredible opportunity to showcase another Gorilla Man Great, Don McLeod !

In the not to distant future keep your eyes peeled for a post about the gorilla work of Don's friend, and
gorilla man successor