A pictorial history of the Don Post Studios Gorilla suits !

Were going to jump into the Way-Back Machine and take a peek into one of Hollywood's go to places to get a Gorilla Suit.... The Legendary Don Post Studios !

Much of the info and photos in this post come from the first hand experiences of our dear friend, and legendary Gorilla Man, Mr. Bob Burns himself !

In fact, going back to the very first gorilla suit Don Post made, it was Bob Burns who modeled the suit for all the promotional photos used to sell them.

The suit was definitely not the most realistic, but rather designed for more comedic purposes. 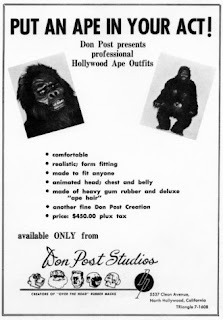 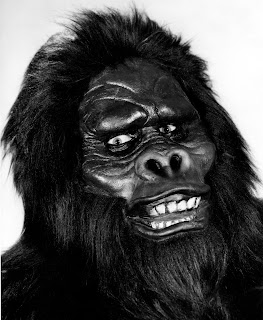 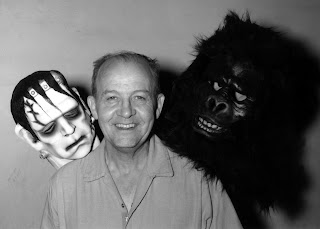 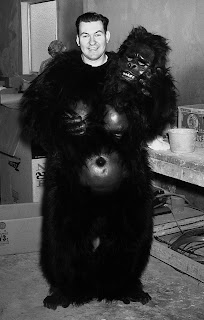 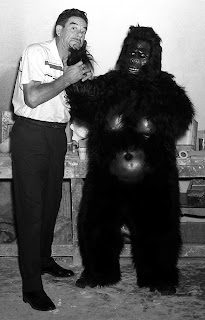 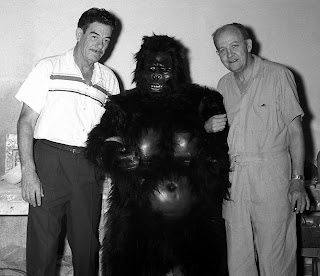 Glenn, Bob, and Don having a blast !

Shortly thereafter, Bob approached Don about making a custom gorilla suit for himself, as Bob had always idolized the great gorilla men of the movies, and Bob wanted to follow in their footsteps....particularly the opposable toed footsteps of Charles Gemora !

Don agreed to sculpt and mold all the rubber parts, while Bob's wife Kathy took on the task of sewing the padding and Fur parts for Bob's new alter-ego KOGAR !

As part of the deal for Don Post's involvement, Bob agreed to let Don Post use photos of Kogar to advertise Post's more realistic gorilla suits. 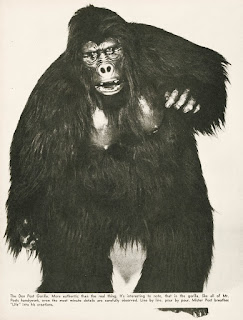 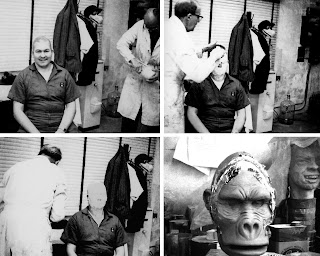 Birth of the Mighty KOGAR !!!
Around this time Don Sr. and his partner Verne Langdon had gotten ahold of a mold of Charles Gemora's suit head from Phantom of the Rue Morgue, and decided to add a gorilla to their popular line of Universal Monster Masks. A clay press was made of the Gemora head, and Verne Langdon sharpened all the details for molding. The head proved too large for a general release, but was used for rental suits, and for sales with studio quality suits. Here again, Bob Burns is again the suit model. 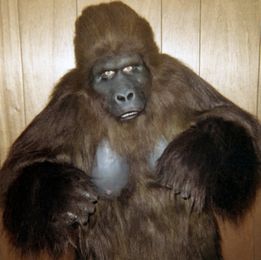 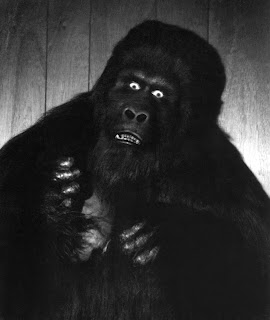 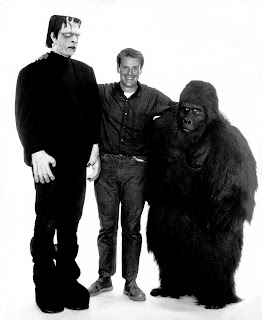 Frankenstein, Verne Langdon, and Bob smile for the Camera ! 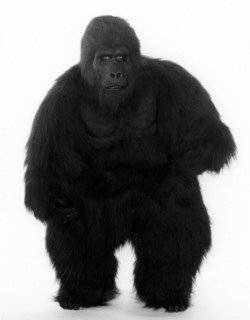 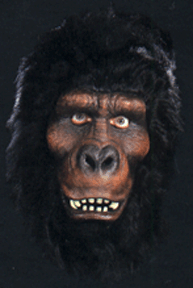 This suit was used in a few movies including one shot in " The Perils of Pauline"....which brings us to the next suit...
A few years later Don Post was contracted to construct a new, ultra realistic gorilla for the comedy movie "The Perils of Pauline". King Kong sculptor Marcel Delgado was brought in with much fanfare to sculpt the new gorilla. Word of Delgado's involvement caught the ear of Forrest Ackerman, the Editor in Chief of the classic " Famous Monster Of Filmland" magazine !
Forry called his old friend Don and before you could say Monkey Suit, Forry and a photographer arrived at Post to document the creation for a future issue ! 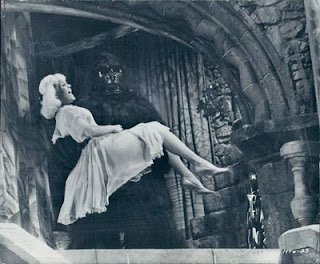 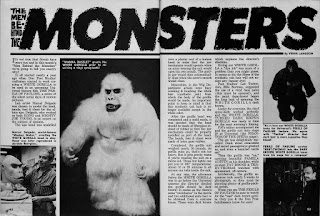 This suit turned out to be so popular that it was reproduced several times and used in a variety of television shows and movies as well. It was also used for photographic work like this incredible photoshoot with the stunning Raquel Welch inspired by Marlene Dietrich's Blonde Venus' 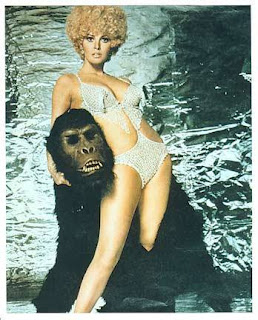 While these suits had a fiberglass liner with a hinged jaw, the head was also released as a deluxe mask to the public in latex and fur, but minus the fiberglass.
Post was also selling gorilla suits to film makers, carnival acts, and magicians and frequently advertised
in Genie Magazine for professional magicians.
Most were based on the popular Hollywood Gorilla Head.

These suits were used in hundreds of TV variety shows, comedy specials, and live performances.
Two of them were seen being worn by Alan Alda and Wayne Rogers on the hit series MASH... Playing poker naturally. 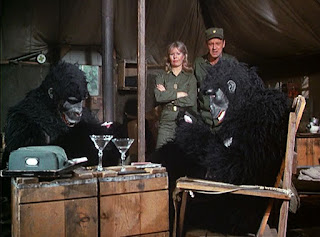 In the 70's Don Post co-owner Bill Malone sculpted a new gorilla mask based on Rick Bakers head from the 1976 KING KONG.
Post made suits with this new head,  named "KONG" appropriately enough, which also saw widespread use in the entertainment industry.... Most notoriously used as the title "Kaiju" in the Korean film A*P*E*. 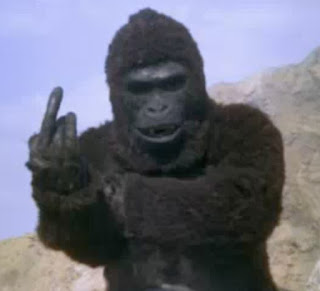 There were several other ape masks made by Post after that, but I'm not aware of any full suits being marketed with those heads. I hope you enjoyed this lope into the past gang... Till Next Time !!! 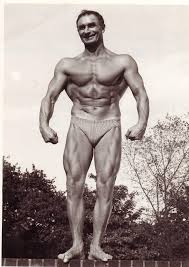 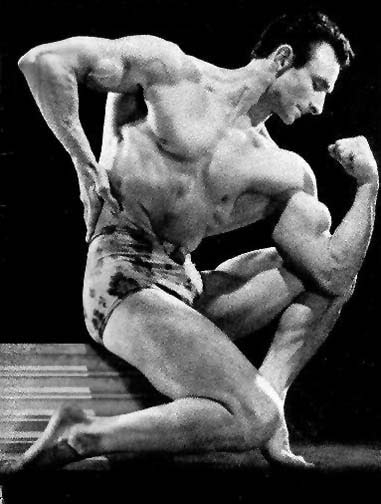 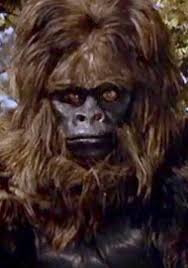 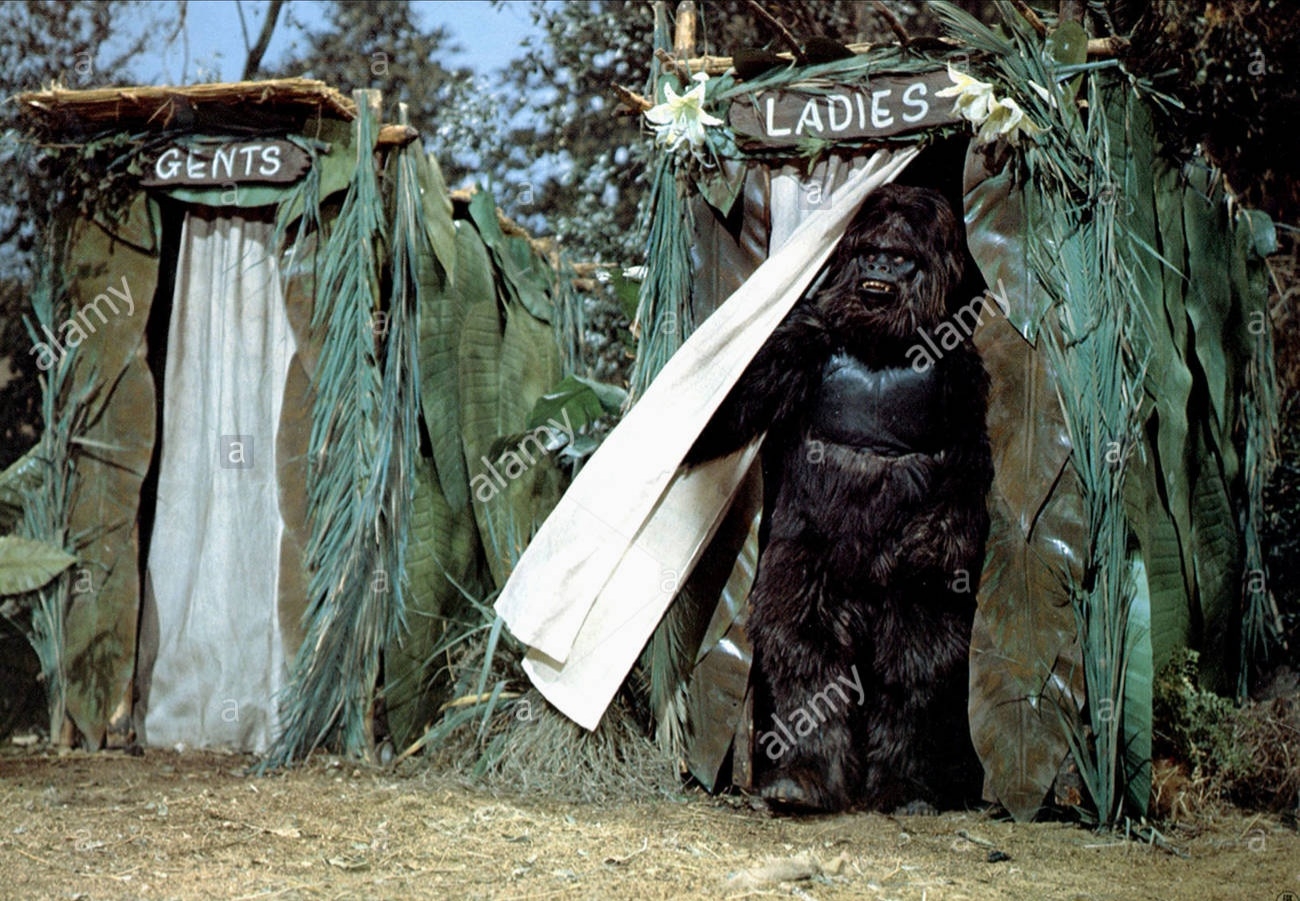 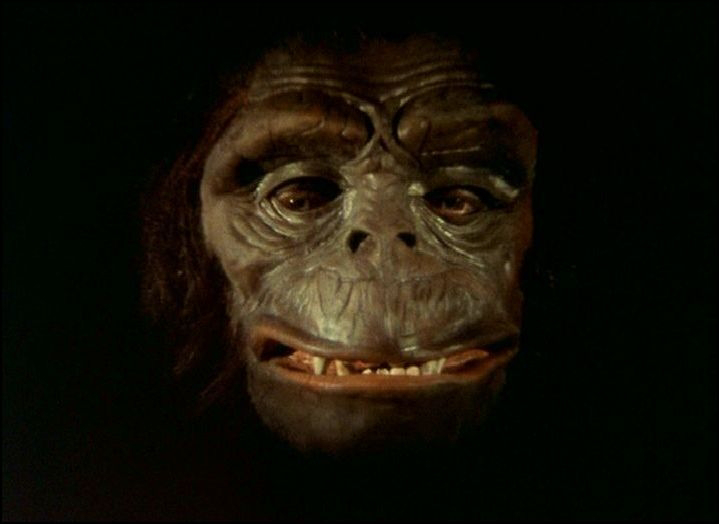 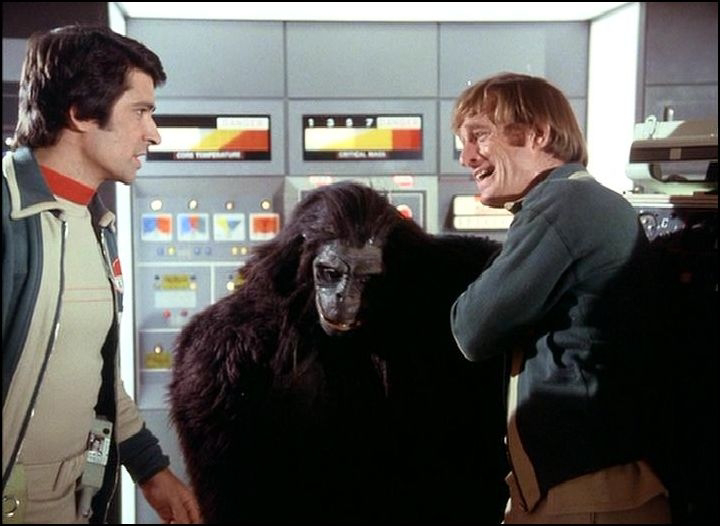 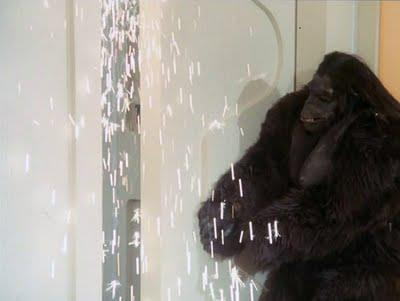