Kentucky Fried Movie, is a crazed, zany, and raucous example of frat boy humor gone wild !
This exercise in lunacy is a collection of  adult oriented skits, like "Catholic Schoolgirls in trouble", and " A Fistful of Yen" strung together with snippets of madcap hi jinx, and fart jokes.
One such snippet is a running gag, featuring a news program with a guest from the local zoo.
One of the animals the zookeeper introduces is Dino, a mountain gorilla. ( Rick Baker)
It seems Dino, has been unsuccessful in the zoo's breeding program, and the discussion regresses into details of Dino's sex life.
The poor gorilla is suitably embarrassed by this, ( brilliantly acted by Baker),
and proceeds to express his dissatisfaction by destroying the TV studio.
Dino continues to pop up periodically throughout the movie, and always with hysterical results.
Kentucky Fried Movie, was directed by a young John Landis.
Landis was no stranger to the rigors of being a primate, after having played the ape man in "Schlock",
and also a background chimp in" Battle for the Planet of the Apes."
Landis befriended Baker during the Schlock production, as Rick created the Ape suit that Landis wore.
For Kentucky Fried Movie, Landis wrote in the gorilla role for Baker, as a way for Rick to get his comedic revenge at the poor treatment he had received while playing the title role in 1976's King Kong.
To accomplish this, it was decided to name Rick's gorilla character "Dino" after Kong producer Dino Delaurentis.
To ad to the insult , it was decided that Gorilla "Dino", despite his great size and strength, would be impotent. (hence the breeding problems.)
I do want to say that the suit Rick made for KFM is brilliant !
It's a great looking beast, and possessing a beautifully expressive face.
The mechanisms were a upgraded version of the classic gorilla framework.
The main factor in the expressiveness of this amazing ape, is the incredible display of body English by Rick Baker !
A true gorilla man, Rick used the teachings of his gorilla mentor (and mine) Bob Burns, to turn in an outstanding performance as a poor humiliated gorilla gone wild.
Ricks eye expressions, created a realism that has never been achieved with the newer styled gorilla suits with the animatronic eye movement. 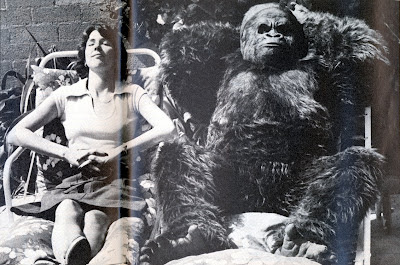 So if you're looking for some nice, mindless, comedy gold, watch Kentucky Fried Movie !