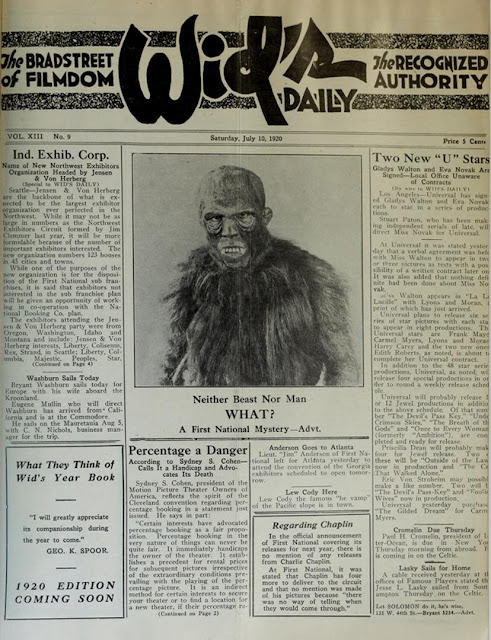 
Bull Montana.....A name that strikes awe in the most devoted of gorilla men !
Where other ape actors worked their primate wonders with elaborate costumes and
mechanized masks, Bull Montana played apes... without a mask !
In the 1920 film " Go and Get It" Bull plays a fierce ape man named Ferry.
Ferry it seems, was a poor gorilla who had a human brain transplanted into his hairy noggin by a mad scientist. (is there any other kind?)
To help Bull channel his inner ape, he was teamed with skilled make-up artists Cecil
Holland, and Charles Gemora.

Using materials of cotton, colodian, yak hair, and hand carved gorilla dentures, Holland skillfully transformed the hulking ex-boxer into a gruesome gorilla.
The great Charles Gemora had the task of  making Bull's fur suit, hand tying the hair a few strands at a time with a crochet needle, into a loose weave backing.

The beastly team were so successful in their efforts, that five years later, they teamed up again for
" The Lost World" 1925.
In the Lost World, Bull played an early ancestor of man, who terrorized the Challenger expedition.
Bull was filmed fairly close-up, drooling horrifically while peering from behind rocks.
This was a true testament to Cecil Holland and Charles Gemora's incredible artistry ! 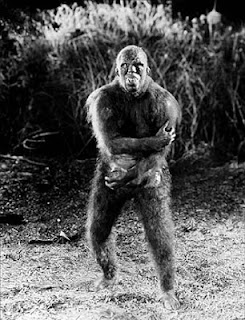 A very special thanks to our great friend, and fellow gorilla man fan, George Chastain for sending us the fantastic photo of Bull Montana in the Wids Daily Newspaper !