Hi my mad monkey minions !
This time, we look into the simian career of a special effects master Steve Neill.
Steve is one of Hollywood's most diverse talents !
Steve has a huge resume under his belt as a make-up effects artist, and creature effects artist for such
films as Star Trek VI, The Undiscovered Country..Puppet Master, Return of the Swamp Thing,Battle Beyond the Stars, and the movie Ghost Busters.
Steve is a renaissance man of sorts, mastering the  the effects fields of Make-up, Visual Effects, practical effects, Miniatures, and a list of accomplishments, that could easily be a website unto itself.

Steve has also become one of the leading builders of radio controlled movie quality models and miniatures. He has built models, ranging from Star Trek to Voyage to the Bottom of the Sea !
His services are sought after the world over!

What about the gorilla stuff, you ask ?
OK, I'll tell ya !
Early in his make-up career, like most creature guys, Steve took an interest in gorillas. Steve built his first suit while working as a sculptor for the legendary Don Post studios, of Hollywood.
Steve, built his suit along side his friends, David Ayres, and Paul Gentry. ( More to come on David Ayres!) 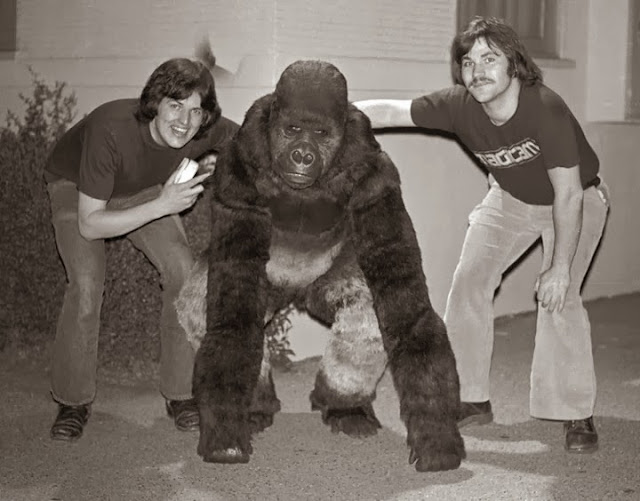 Steve's first suit was excellent, but a mere foreshadowing of what was yet to come.
After Post, Steve became good friends with master make-up artist, and modern day gorilla God, Rick Baker.
Rick was instrumental in getting Steve's early career off to a phenomenal start!
His friendship with Rick was also a learning experience for Steve. Rick taught Steve a great deal in terms of techniques , and mechanics of advanced make-up and creature effects.
Steve took the teachings of Rick to heart in regards to gorilla suit building. 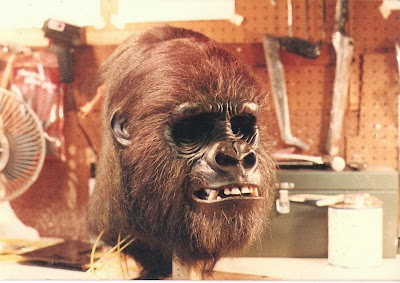 Steve went on to build an amazing suit that he used professionally on many occasions. The most notable,would be the King Kong commercial for Transamerica Insurance Co. 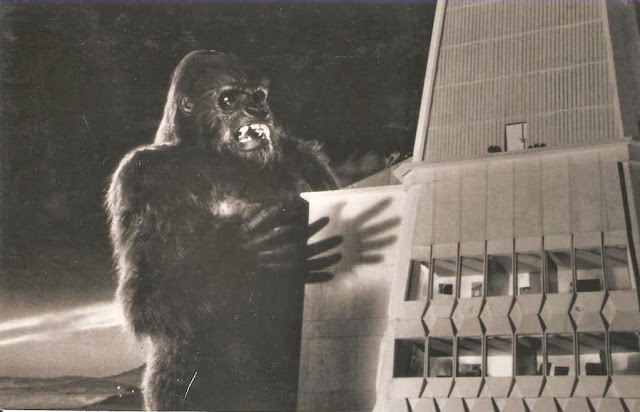 There were two versions of the commercial, differing only in a lengthier destructive intro. 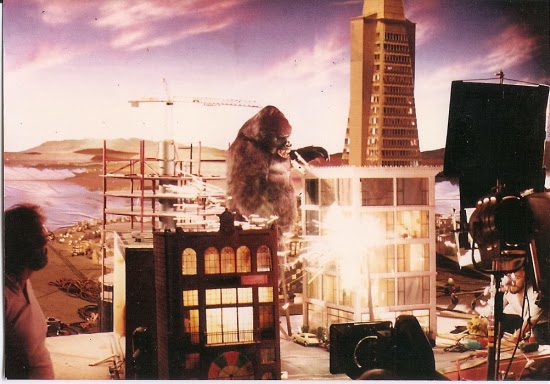 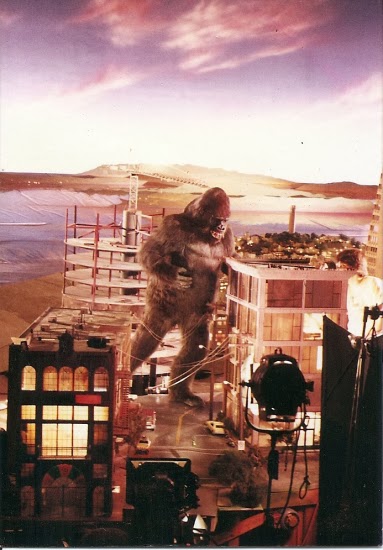 The primary theme was Kong (Neill) climbing the Transamerica Pyramid in San Francisco California.
In this commercial for Transamerica Insurance, King Kong is shown on a destructive rampage through a big city. Eventually he scales the walls of a skyscraper and knocks over some potted plants on a penthouse terrace while swatting at several attacking helicopters. An indignant tenant appears and wants to know "who's gonna pay for this mess?" Slogan (supered): "Transamerica. The power of the pyramid is working for you." 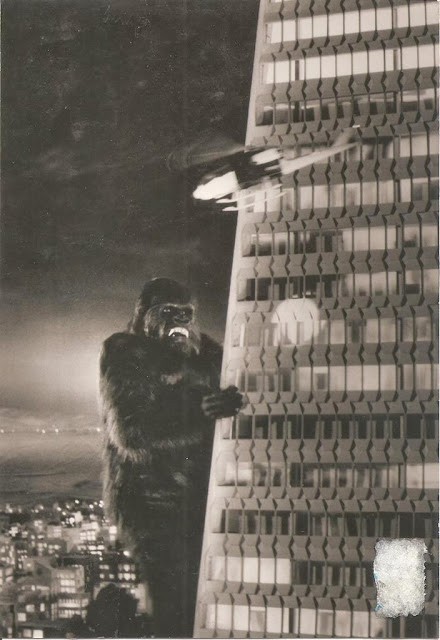 Working with, and supporting Steve in his Kong outing, was his beloved, late wife Gilly.
Gilly puppeteered Kong's face, in his rampage. 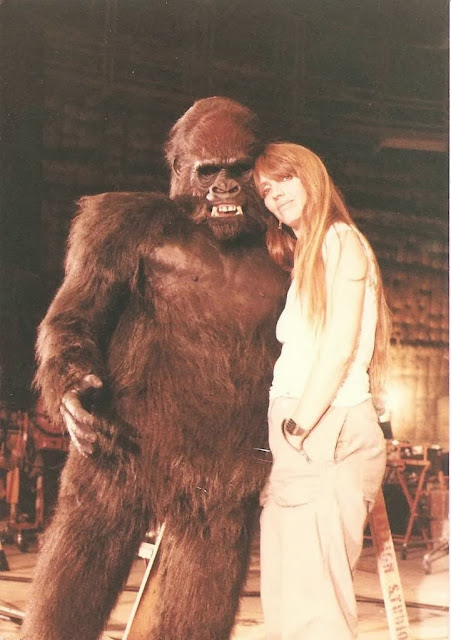 Re-Christening his ape alter ego "Carlo" , Steve also got to go ape along side master gorilla men Bob Burns, and Dale Park in an episode of the TV series, Rags to Riches.
Here Steve and Bob, share a snack. 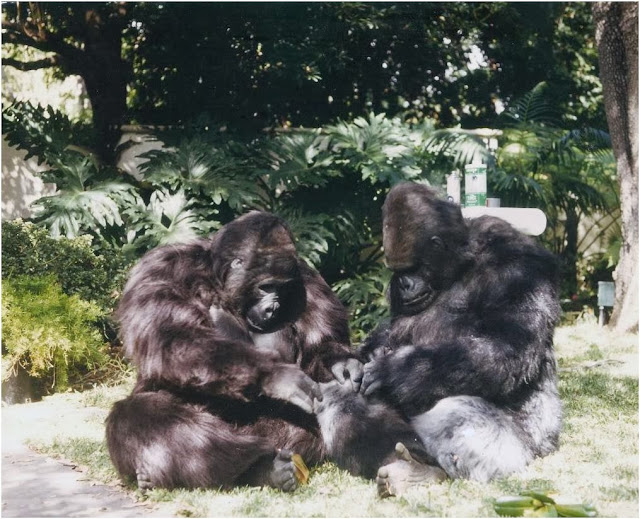 Speaking of Dale Park, I found out from Steve, that He made the face of Dales Suit ! The face came from the same molds as Steve's first suit he built.
Bob and Steve have been friends for many years, and have worked together on many projects.
When Steve created the Mac Tonight character for McDonald's, (man in the moon playing piano)Steve, Bob, and Gilly puppeteered the face for Mac. 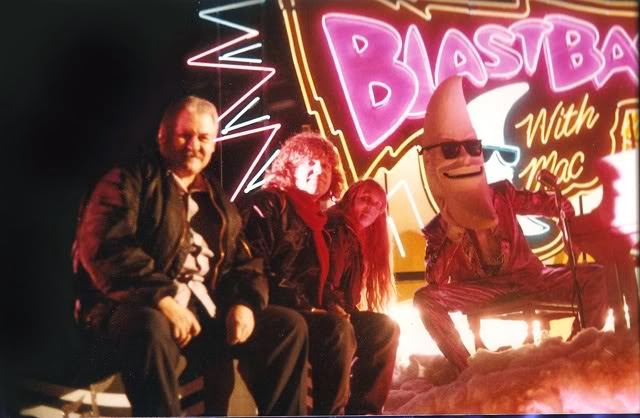 Mac was played by renowned creature actor. Doug Jones. (Abe Sapien from Hell Boy, and The Silver Surfer from the Fantastic Four)
Steve has a daily vlog on YouTube, called Steve Neill's Garage.( SNG )
It's a fascinating look at Steve's fantastic world!
http://www.youtube.com/playlist?list=PL3CF69F6AC94B4F71

Check out Steves creations, you'll be glad you did !...Oh, and look out for Rosie the Wonder Dog !