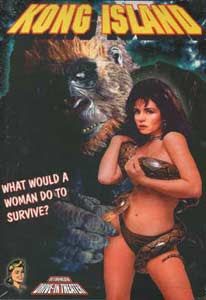 KONG ISLAND is the second disc in Retromedia's boxed KONG COLLECTION and I figured I may as well get this one out of the way before I get on to more promising gorilla suit films. The dvd cover art naturally has nothing to do with this sixty’s Italian cheapie. The tasty brunette and the decent ape suit are nowhere to be found and come to think of it, there's no island in the damn film either! This shoddy, poorly scripted, stock footage heavy pile of dreck elevates the accompanying QUEEN KONG to art house status.
Our tale of revenge and the follies of scientific advancement open with a payroll heist in the African scrubland that goes bad. 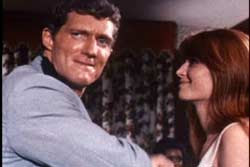 Mercenary Burt Lawson is double crossed by his brother in arms, Albert and is left for dead. Unfortunately for Al, he botched the job and a bitter Burt tracks him to Nairobi where he hooks up with an old friend and a former flame, Diana. Disco dancing breaks out and beefcake Burt gives us his best white man's overbite as he boogies with his buddy's daughter Ursula, a fetching Italian redhead. Ursula and her brother are planning to head off in search of the 'sacred monkey' and urge Burt to join them. 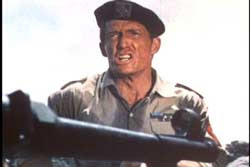 He declines, saving his energy for his quest for revenge and fending off Diana's flirtations. The siblings head off for a jeep ride where they smile and point a lot in a succession of tight shots as stock African wildlife footage is intercut. Earlier in the flick it is revealed that Albert has used his ill begotten gains to finance his mad dreams of remote controlled gorillas. As Ursula peels off her sweaty duds before bed, backlit through the tent fabric, crazed gorilla's size up the camp before snatching her up and knocking off a porter or two. Albert's flunky instructs Ursula's brother to lure Burt back to the jungle in exchange for her life. When informed of Ursula's capture Burt is coldly adamant he wants nothing to do with her rescue until it is hinted Albert is behind it all. Returning to the jungle, Burt, bro and the porters are tailed by a mysterious stranger who falls victim to the hard wired apes. Burt tosses a steely glance and a bullet or two, saving the man who reveals that he is an Interpol agent hot on Burt's trail. Burt is offered a pardon and a reward if he will help bring down Albert before his unnatural experimentation menaces the free world. Returning to his camp, Burt discovers bro dying but he manages to confess his complicity in the villain’s plans before choking on his last breath. Burt and agent Interpol carry on tow 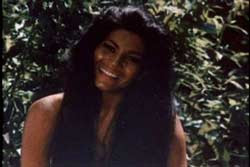 ards Albert's subterranean lair laden with second rate Bond villain technology. A tribe of angry natives capture the pair then inexplicably cut them loose, count to five and then let them have it with spears. Interpol man gets skewered but hunky Burt disappears into the jungle. Coming upon a tranquil river, Burt sheds his khakis and proudly displays his chiseled musculature. Splishing away contentedly, the fabled 'sacred monkey' leaves him some jungle snacks before revealing she is a topless native girl who has long hair that drapes across her breasts and an idiotic grin and titter that is borderline simpleton 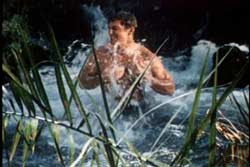 Refreshed and recharged, Burt manages to trap our jungle girl and make friends. The film climaxes with a host of double crosses and scraps that leave about half the cast dead! After dispatching Albert's flunky, Burt surprises his nemesis but fails to notice the stinky, mangy monkey's advancing from behind. As he wrestles with the apes, Ursula informs him the giant billboard bearing a crosscut illustration of the gorilla's head with a big blinking red light is somehow the source of Albert's domination over the gorillas. The first shot misses, thus heightening the tension of the moment, yet Burt squeezes off another shot destroying the blinking lens and setting off a chain reaction that destroys the equipment and unleashes some righteous gorilla payback upon Albert. With order restored to the jungle, Burt and Ursula bid farewell to the wild child and paddle back to civili 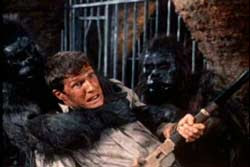 Tough guy Burt is played by Brad Harris, an American fixture in the flourishing Italian cinema industry of the sixties. This is the first flick I have seen him in but with his chiseled looks, strong jaw and rippling muscles I figured he must have been a veteran of the sword and sandal genre. A quick glance at IMDB reveals several dusty entries as well as a number of horror and action films before returning to the US market on television in recurring roles in DALLAS and FALCON CREST. Marc Lawrence is far from gripping as the crazed Albert and also suffers the indignity of having his part dubbed. I am not certain if it is in fact another voice actor or merely half assed post production work but either way it doesn't help. This was not the first gorilla brain surgery film Marc appeared in.(!!!!) Almost 30 years earlier, Marc Lawrence was one of several gangsters menaced by Charles Gemora and his superb gorilla suit in the Universal classic THE MONSTER AND THE GIRL. Marc was typically a heavy, racking up scores of screen credits until the House Un-American Activities Committee exposed his membership in the Communist Party. After naming names, Lawrence found himself blacklisted and made his way to Europe where he continued to work regularly until he was able to return to the US. Marc continued to act well into his nineties, passing away in 2005.

The gorillas in KONG ISLAND are barely worth comment. Most scenes are badly lit which results in the suits blending into the darkness, a small mercy considering how awful they look under scrutiny.
The greatest crime this film commits is mediocrity – there was ample opportunity to ramp up the absurdity of the various roles but it simply plays out dully with momentary flashes of trashy gold. KONG ISLAND will now be relegated to a choice of last resort in my gorilla suit library.