ORIGINALLY POSTED 2005-11-24
It is a good time to be one obsessed with cinema simians! 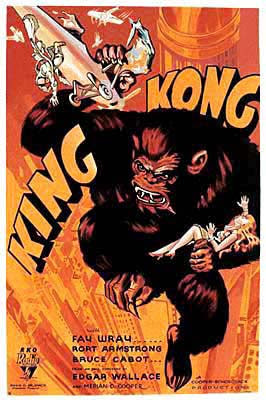 The release of KING KONG in North America has been long in coming. I realize that the upcoming Peter Jackson remake will guarantee more interest in this film milestone that recent generations are generally ignorant of, but it has been a painful wait. I came across a Ted Turner VHS version he perverted with colour back in the Eighties and have watched it every 3 or 4 weeks for the past year or so. Although any film purist has general disdain for what the now respected creator of TCM once subjected classic black and white films to, I must admit to missing a sepia tinted opening credits. The remastered DVD print still has some stretches of grainy and distressed images but the moments of clarity are electrifying. Extras on the double disc edition are gratifying for the Kong crazy - Peter Jackson's input has provided a loving and respectful perspective on what any viewer will come to realize was not only an incredible fantasy film but also a journey into virgin territory not yet explored by Hollywood at that time. The original Blockbuster also gave birth to several technical achievements in effects, sound, and camerawork.


Above all, there is Kong. Willis O'Brien, stop motion pioneer, captures our hearts and minds with his sympathetic beast, delivering a hypnotic performance with foam rubber, metal and moments stitched together one frame at a time. There will always be a part of me that refuses to accept that Kong as an inanimate thing. There is a magic to the brutal and innocent ape that no CGI creation will ever match - something of Obie ( a nickname Willis was affectionately known by) is alive in every frame and truly breathes every time someone witnesses the King of Skull Island battle for supremacy or genteelly nudge Ann Darrow curiously. What will the remake offer? Hard to say but I was shocked by the empathy Gollum elicited in me as I watched LORD OF THE RINGS and I have faith that Andy Serkis and WETA will not let the fervent Kong fanatic, Peter Jackson, be disappointed - after all, he's been aching to get this project underway for years. The trailer has shored up my hopes - the final clips with Kong on the Empire State building gives me a chill every time so far. A giddy giggle bubbles out of me with each viewing. I do find myself somewhat concerned with the running time - 3 and a half hours - ouch, sore butt and no pee breaks! A greater worry is one I've held since the cast was announced. Something about the Jack Black narration in the trailer makes me groan inside - still, Carl Denham is masterfully played by Robert Armstrong in the original and it will take more than a few viewings of the new film to accept another in his place. I have great respect for the contributions of Fay Wray and Bruce Cabot in KING KONG but Armstrong is the most distinct and dynamic presence in the film.

A sidebar here about the KONG tie ins - the toys are shit. I can't bring myself to shell out cash for the poorly crafted TOY BIZ figures. The bright red scars look like crap and the fur highlights are often smeared. Another toy has a molded rubber face and a shoddy fur body that emanates angry growls and roars when squeezed. Truly heartbreaking for this 33 year old child. I was fortunate enough to find a McFarlane Toys Kong a few years ago and it kicks ass. The enraged ape figure is more naturalistic the actual cinematic inspiration, and looks stunning atop the iron girder display, manacles and broken chains dangling (come complete with tiny maiden).

There are a few gorilla men connections to the original 1933 KING KONG that not everyone is aware of. Prop collector, conservator extraordinaire, and the last of the great gorilla men Bob Burns, owns one of the original armatures of Kong. His recent trip to the New Zealand studios where Jackson is filming was recently posted on Kongisking.net and worth a view. Traveling with his lovely wife Kathy, Bob brought the armature to inspire and excite the film crew and will also have a cameo in the upcoming remake. Bob is wonderful and warm soul, with whom I had the privilege of exchanging emails with, and it was a treat to see him on the set with Jackson sharing his love of Kong.

Burns also shed some light on a curious piece of footage I had come across of Charles Gemora that has a strange relationship to the big ape. I have not yet delved into the tale of Charley but suffice to say Gemora was one of the great gorilla suit performers who worked in the movie industry from the 20's until his death in the 50's. He was a talented sculptor and effects technician and by all accounts a sweet man with an impish sense of humour. Gemora was hounded by stories that he had claimed to have played Kong and when Bob Burns broached the topic when he met him at Paramount Studios, Charley was bitter about the untrue assertions. It is likely that sloppy entertainment reporting led to the tall tale. Press around KING KONG was misleading - the studio encouraged false explanations of the giant apes performance. How could audiences be properly intimidated by a puppet you could snatch up in one hand? Gemora had a reputation as a gorilla man and it was not much of a stretch to connect him with KONG. 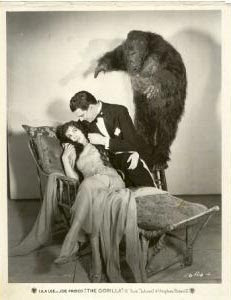 During my ongoing research I came across a clip at GETTY IMAGES ( a web image bank) that depicted what I took for test footage of Gemora lumbering through a miniature cityscape in his ape suit, drawing towards the camera and making menace. I was floored. The suit was used in the late 20's and early 30's though was out of use after KING KONG's release. The film appeared to predate KONG - I and a few of my fellow film fanatics wondered if it was test footage for Kong or , just as fascinating, another giant ape project never realized?! Some months after I came across the footage, I was introduced to Bob Burns by artist George Chastain who informed me it was trailer material from 1930's THE GORILLA, a film about a murderous (and relatively short) ape. The city footage was illustrating the grip of terror the beast had on the urban populace. Oddly enough I came across a notation about the film on the IMDB as I was waiting for Bob's reply; the film is considered lost and the shots I viewed are all that remain of it. Charles Gemora has been illustrated by his daughter Diana as a very humble man who was loathe to take the credit he was due, let alone claim to be something he was not. To view the amazing clip head over here and select clip 562-19.

On another Gemora tangent, the re-release of the George Pal WAR OF THE WORLDS has given the gorilla man nods for his creation of the unforgettable Martian in the film. In both the commentary and making of documentary Charles is singled out for his contribution. With his teenage daughter's assistance, Gemora whipped up an alien creature in a single evening when the original one was scrapped at the 11th hour. Working all night long, father and child laboured until shooting began - Diana relates how the prop was still wet and would have come apart if it had toppled during the frightened dash out of the farmhouse!

Diana was responsible for the pulsating veins while Charles worked the limbs from behind the torso. Her enthusiasm for late father and the opportunity to share it with others is abundantly clear on the dvd extra. I share her joyous satisfaction that her dear ol' dad will have his name known by film fans around the world. Please check out her site dedicated to Charles and read in great detail about the night of the creatures creation.