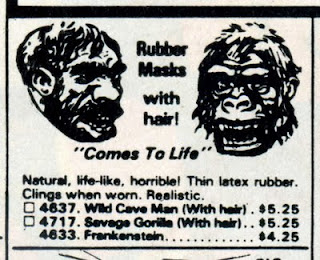 As you read this blog celebrating the great gorilla men of the past,you may find your self wondering, "why would anyone want to specialize in dressing up like a gorilla  ?"
Well, the easy answer would be brain damage, but it's actually a little more complex than that.
for me it kind of started when I was about 12 years old, while reading comics and monster magazines.
I was always seeing a fantastic ad for"The Savage Gorilla" mask.
Gorillas were a favorite movie subject for me, so naturally I thought it was the coolest thing ever !
The drawing illustrating the mask was incredible, a really monstrous looking thing .
It was shortly thereafter that I realized that, " with this mask, I can Rule the World ! mmmwwwaaahahahahaaaa !!!
Several weeks worth of allowance later ,the order form was hastily clipped out,and those hard earned few dollars were sent off to buy the stuff dreams are made of !
Back then, this type of purchase could take anywhere from 3 to 6 weeks till you got your goodies.
The first few weeks were spent meticulously drawing  the mask I had ordered.
Then, after 5 weeks af checking the mail with no results, it finally arrived !
At first I was puzzled as to how they were able to get the Savage Gorilla into that small Manila envelope.
I tore open the flap and saw a large hunk of black hair attached to it.
The glue on the flap had bonded to the "hair" on the mask .
After carefully removing the wad of paper thin latex goodness, I was immediately disappointed because this wasn't at all what I'd imagined.
The wrinkled mess that I held, looked nothing like the illustration in the comic book.
It was molded in a pale tan  (almost white) latex, with red and black detailing that looked like it had been applied with a can of spray paint . On top of the mask, was the remains of the mat of shaggy fiber hair. 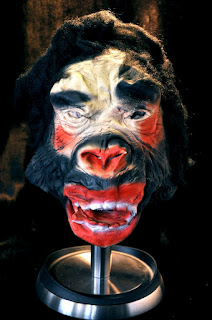 After what seemed like an eternity staring at it in despair, I finally went to a mirror and put the thing on.
I don't know exactly how it happened, but once it was on, the wrinkles flattened out and the mask started to actually look somewhat like a gorilla. The smell of the latex cast its spell on me, as I watched in the mirror and moved my mouth and face and the mask did the same.
I tested the range of motion, smirking, grimacing, making all manner of faces and the Savage Gorilla matched me in my every move.
The more the mask moved around, the more creases and wrinkles worked out of it.
I was actually having fun with the goofy thing !
My mom got a huge kick out of me making a complete fool of myself with all manner of gorilla noises coming from inside the mask.
I knew It wasn't the mask I had imagined but it no longer mattered to me.
That goofy little mask was literally worn to death.
After several years of a well played with life, the Savage Gorilla started to fall apart.
I still have a fondness for that goofy little monkey mask,as it was the first gorilla mask I ever had, and miss having it.
Thankfully, because there are collectors of Topstone masks, the makers of the gorilla and other great characters, they will live on, documented for posterity !
I want to thank Ray Castile for the use of his photos of the Savage Gorilla !
Ray is one of the foremost collectors of Topstone masks, and an expert in vintage monster toys as well. I highly recomend his great website The Gallery of Monster Toys !
http://thegalleryofmonstertoys.com/ 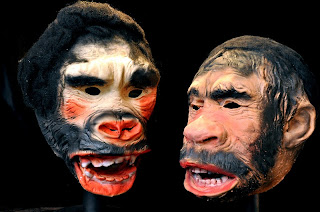 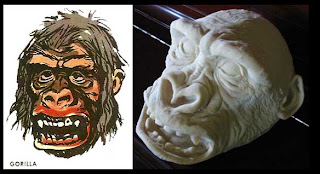 This photo shows a thick casting that captures the look of the original sculpt.

As you can see, the sculpture is very good.
Well, there it is. This goofy little wad of rubber and hair was all it took to warp my young mind forever,and I've been dressing up as a gorilla ever since !