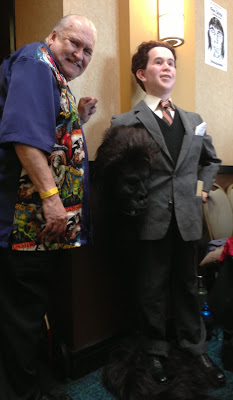 Bob Burns and his mentor, Charles Gemora
Hey gorilla gang !
﻿
﻿
﻿
﻿
Charlie Gemora made a surprise appearance at the April 12th - 14th, 2013 Monsterpalooza convention in Burbank Ca.
Was Bob Burns's time machine used to accomplish this feat ? Not quite, although Bob was there for the fun.
Charlie was brought to life through the skilled hands of Special Effects make-up artist Jason Barnett. The sculpture of Charlie is so completely life-like, you would think your standing next the Charlie himself ! 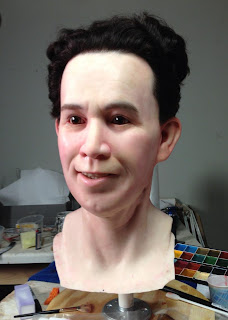 Jason gives us a little background on his project :

I've worked as a makeup artist/sculptor for over 20 years. I've never challenged myself with creating a likeness. Let me tell you, making a life-sized Charlie Gemora was incredibly tough! I spent over a year sculpting and looked at over 25 reference photos supplied by Charlie's daughter, Diana. I did my best to capture the playful nature that was so Charlie.   -Jason Barnett 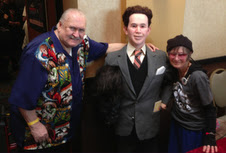 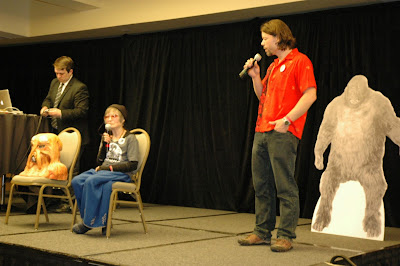 Diana, and Jason Barnett
﻿
Jason is also in the early stages of a  documentary about Charlie. who was the first of the great Gorilla Men ! The documentary will cover all aspects of Charlies incredible talent...from Hollywood set sculptor and designer, to make-up artist...From rampaging gorilla, to invading martian.  Charlie was such an incredibly skilled artist in all aspects, it's easy to see why Jason would be so devoted.
If you would like to contribute to this noble cause, please visit Jason's fund raising page on Kickstarter, and be a part of Charlies incredible tribute.