The Beast that Lurks Inside

In the early days of Gorilla Men, I was fortunate enough to catch the ear of writer/filmmaker Ted Newsom regarding his fantastic FILMFAX article on Steve Calvert. Ted was gracious enough to revisit his piece and expand it beyond what saw print, much to my delight. I am happy to welcome Ted back to Hollywood Gorilla Men and hope you relish his tale of revelation and ape suits as much as I did..
Enjoy!
Gorilla Man

For some reason I didn't understand, I was always fascinated and spooked by guys in gorilla suits. Everybody has a bit of it, I think; certainly everybody who read this blog. With me it was gut-level. I never understood why, for about 30 years.
When I was little, maybe 6 or 7, I described a scene to my mother: it's an old-fashioned circus, with the sight and scent of sawdust, a tent with daylight just beyond, and a colorful crowd. And a giant gorilla runs over and scares me. It didn't look like a "real" gorilla, not like a "real" chimp, it was a fake, a monster, a scary thing. Mom dismissed it as a dream, probably something I saw on TV.
That made sense. Over the next five, ten years, I saw movies like the Marx Bros. AT THE CIRCUS and GORILLA AT LARGE, which had imagery similar to that vivid vision, and I accepted Mom's dream theory. No matter how un-gorilla-like the ape suit was in any given movie, I'd get creed out in an unexplainable way. The Crash Corrigan/Steve Calvert suit and face looks nothing like a gorilla, really. The George Barrows get up looks like a big fat guy in a hairy coat with a pinhead. Janos Prohaska never fooled me, even when I was little. Charlie Gemora's stuff was fun, but from the time I saw photos of real apes, even his relatively accurate suits were obvious costumes.
Still, they creeped me out, especially the Calvert and Barrows appearances. It seemed they were scary not in spite of their unreality, but because of it. They weren't "gorillas," they were monsters. Big, hairy, snorting monsters. 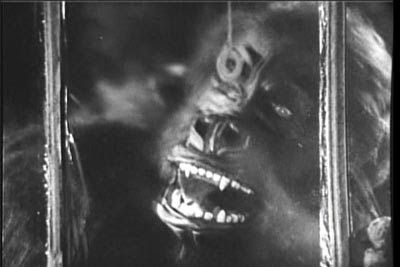 As an adult I got to know Steve Calvert well, and he was a sweet, gentle man with a subtle, observational sense of humor. Meeting him (the father of a friend of my ex-wife) and getting to know him took a tiny edge off the childhood fear I had of the monster in BRIDE OF THE GORILLA.
Later still, I got to know Bob Burns, an equally sweet, fun man with a more impish humor. He knew how to milk the natural human reaction to a 6 foot tall, 300 pound gorilla. He told me a wonderful story about being hired by Hustle Magazine for a King Kong photo shoot which, I don't think ever was done Why? As a gag to sell the idea to then-publisher Althea Flynt, the guys asked Bob to suit up and come in.
Having worked at Flynt Publications twice, I can say that Althea, in 1982-83, was not the most stable of women. Well, they talked to her for a couple of minutes, told her they had a great idea for a photo layout, and signalled Bob. He rumbled in, grunting madly, and poor Althea just shit. She started screaming hysterically, running into the corner. And of course Bob didn't make her life any easier, jumping up on a chair, waving his arms angrily, and staring at her. Althea turned the project down. I don't mention her to make fun of her. Her reaction was not unique.
I asked Bob to do some comedy bits in a sci-fi spoof I made, originally titled "Attack of the B-Movie Monster," later "The Naked Monster." I knew Bob had excellent timing, having gotten such a kick out of the "Ghostbusters" series he did for Filmation, with Larry Storch and Forrest Tucker. Plus I had seen Bob in his eye-boggling suit at conventions. Prepping for his scenes, it was fascinating to watch him get suited up, with his wife Cathy assisting: one piece at a time, some black to give him raccoon eyes, so that his normal skin wouldn't show in the eye holes of the mask, etc.
We were setting up in an alley, our little four person crew mucking about with the tripod and Super-8 camera. I was watching them from Bob's position, standing beside him. With my head turned, I couldn't see Bob, since I was watching the guys, and when I started to turn my head, Bob saw that movement. The moment he knew he was coming into my peripheral vision, he SNORTED. Oh, God. I nearly crapped my pants.
Flash forward several years more. I had traveled to Portland, my home town, for a wedding, a funeral, a reunion, something. After whatever it was, I ended up at my sister's house with family, nieces, nephews, at lest one sister,a brother, and my Dad and my aunt. As will happen, the elders started telling embarrassing tales about everyone else, and how cute they acted when they were little.
My dad said, "I remember once when Teddy was little, not even two, maybe eighteen months if that. Me and Bobby [his brother, my uncle] took him to an old-fashioned circus. It was one of those tent things, with sawdust and everything. We were sitting right down in the front row.
"This guy who was dressed up like a gorilla came RUNNING over to us, scooped up Teddy out of my arms, and RAN around the circus ring. The audience just went crazy, screaming, laughing. Then he brought him back to me.
"Like I said, he couldn't have even been two yet. Oh, he didn't yell, he didn't cry, anything. But his eyes were wide as hell, and they glowed just like the headlights on a Buick."
And then I understood. I still love gorilla suits, but I'm no longer scared.
Well, not usually...
Posted by Gorilla Man at 8:14 AM