Now that we've got a foot in the door, next we'll work up our best Arnold Schwarzenegger imitation, and tackle a little "Body Building."

Now that we have a head, a pair of hands and a pair of feet, all we need is a body to attach them to. I should make it quite clear here that I would not normally make a suit of any kind in this manner. I'm doing it this way as an illustration and a personal exercise. I've challenged myself to use was much of the Craigslist foam as I can and I committed to making use of the two cheap Halloween gorilla suits I found. Even if I was to do this as a build-up again, I wouldn't use polyfoam or pre-existing suits. I would use open cell foam and buy higher quality faux fur by the yard. The open cell foam (known as Quick-dry, Dry-Fast, Fast-Dry, etc.) is used in upholstery for outdoor cushions and such. It's lighter and stronger than polyfoam and lets much more air move through it. It's harder to shape and cut, but it's worth it.
Also, normally the suit would be carefully planned out and I would be working off of patterns to match side-to-side, etc. But I'm racing through this thing as I'm under the gun on other things, so I'm really just winging my way through it all!
Let's forge ahead with the body-building!


Here I've sewn the t-shirt to the sweatpants and sliced the T-shirt down the back. I was planning on putting two zippers on this suit: one on the T-shirt and one on the fur. But I decided that one strong zipper on the fur should be enough and make the suit easier to get in and out of. We'll see. 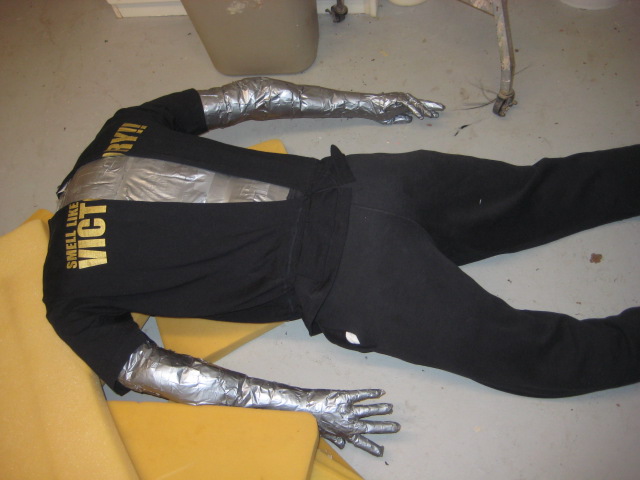 For now, I'm just pinning the back closed until I glue foam over it to hold it solidly. 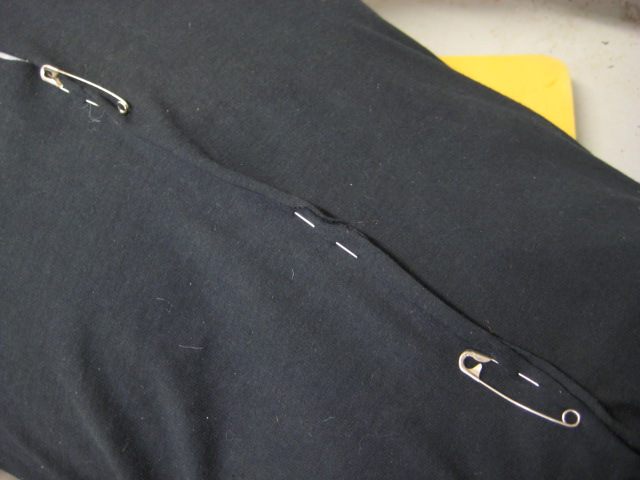 I'm starting with a 2" thick former seat cushion as the chest piece. I've cut darts to shape it before gluing it in place. 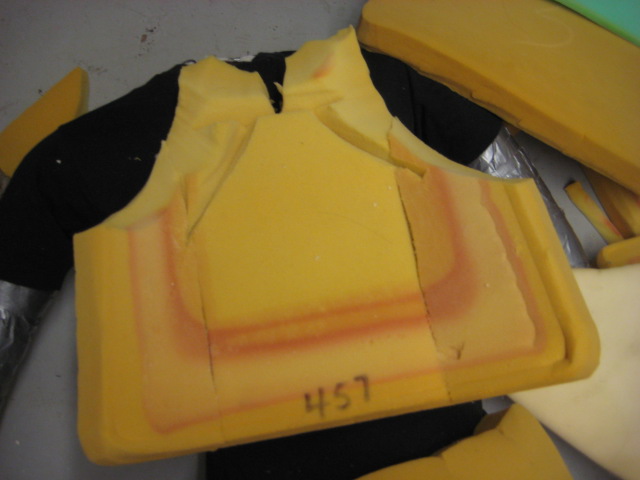 Next, I added a belly piece lower down with open vents to help take up movement after the fur is applied. The mid section of foam between the top and bottom pieces is only 1" thick and glued to the outer edges of the other pieces. Hopefully this will also allow a little more movement. A simple collar ring was added as well. 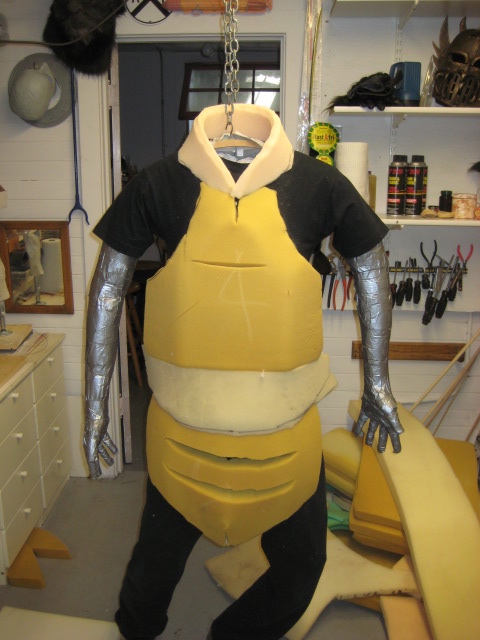 In this next photo you can see that I've added another section to the belly to build it out further. I have to be careful as I have a limited amount of usable fur, so I can't make this guy too huge! I've added pectoral muscles, sliced a gap for movement under them and added shoulders. The shoulders work like epaulets and are only attached along the top of the shoulder, again to allow as much movement as possible. 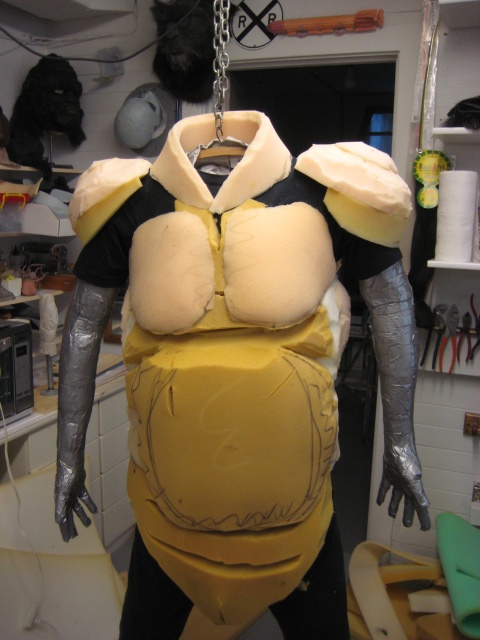 After that, I blocked in the upper arms and upper legs. The foam on the thighs extends just beyond the knee. Hopefully, combined with the lower belly, this will help suggest shorter legs. 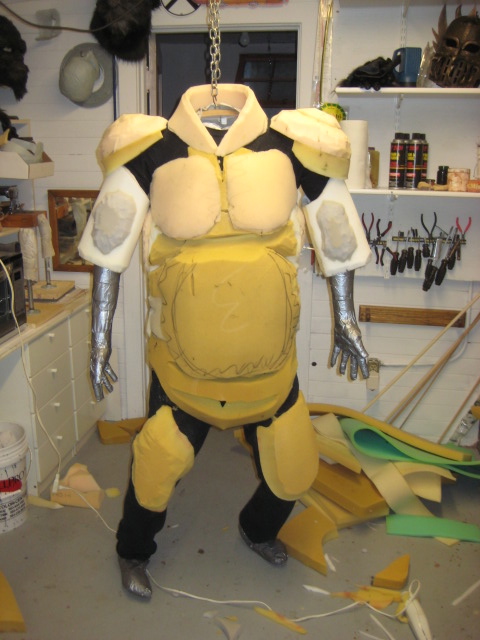 Once I felt comfortable with the front, I blocked in the back. I would have built this out thicker, but again, I'm concerned about being able to cover it with the fur I have. Note that I have attempted to leave open sections uncovered by foam between areas wherever possible. Foam gets noticeably stiffer after it's been glued to cloth and fur, so any option for increasing movement should be taken. 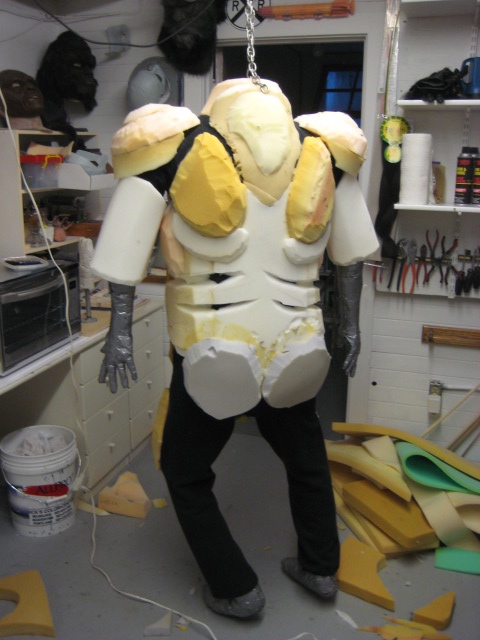 I'm stopping the foam work at this point because it is the end of the day and I want to do the finish work on the chest so that the latex has time to dry overnight.
The top of the belly foam had an edge that I couldn't quite trim down enough with scissors, so I wound up having to sand it smoother. Yes, foam can be sanded, but it's not easy. Use very rough sandpaper and light strokes. 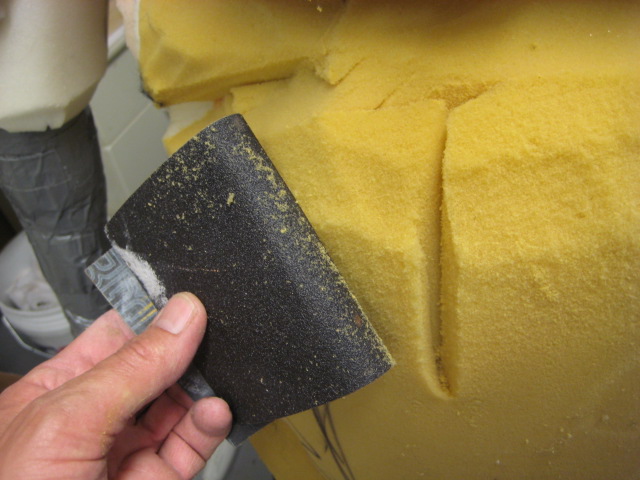 When it looked like it was good enough, I went ahead and added the batting/latex work. 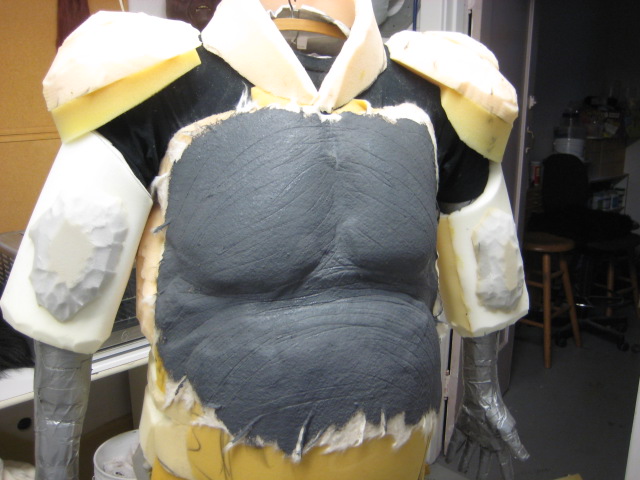 Note that this covers the gap I cut between pecs and belly. In effect, this skin is loose over an open gap and should flex and fold a little when worn. 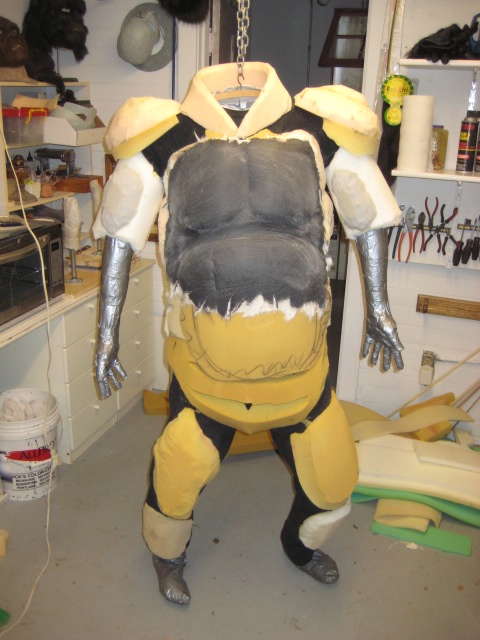 This morning I finished up the foam work, adding lower legs, more rear end and making sure that edges were glued down. 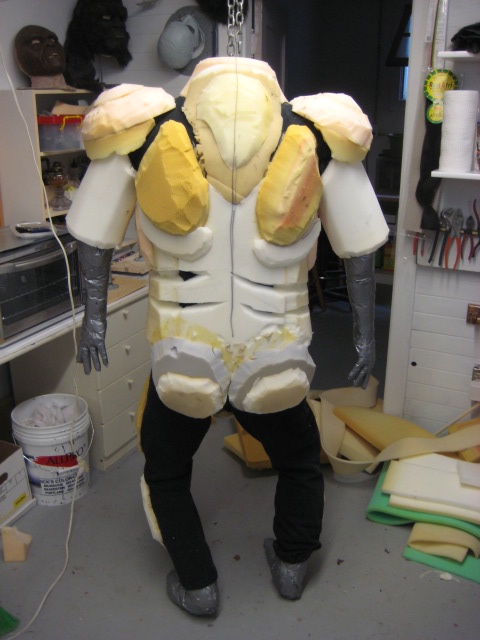 The black line up the back shows where the back will be sliced open and where the zipper will go. I'll probably fiddle with the foam a little here and there a bit more, but this is where we'll stop for now. Next time, we move on to my greatest fear on this whole project: making those crummy costumes fit this much larger form!
Posted by Mighty Bongo at 4:31 PM