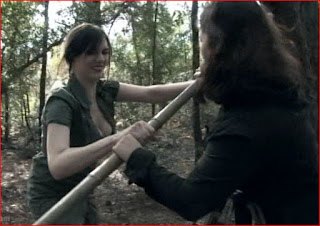 A deadly catfight erupts in the jungle ! 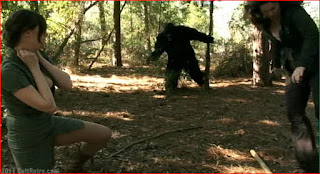 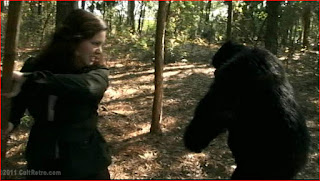 Hey !, Watch it with that fighting staff lady ! 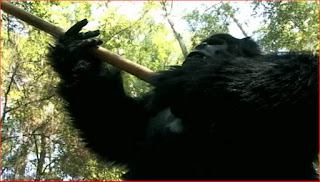 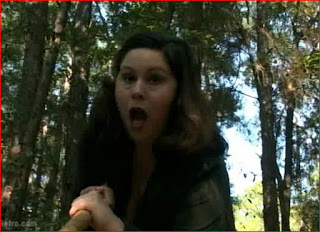 Are you enjoying the view up there ? 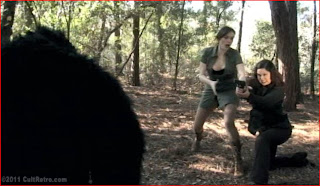 Guess what gorilla gang..... your old buddy Bongo is back as Satan the gorilla in the next TWO exciting chapters of "Nyoka the Jungle Girl" !

The last Chapter"Return of Nyoka the jungle Girl" left off with Nyoka about to be sacrificed beneath descending blade of a giant pendulum ! With time running out, Nyoka struggles furiously against the chains that bind her courtesy of the villainous Crimson Skull. She has managed to free her legs , and hands, but is bound tight by a metal collar around her neck. The deadly blade begins its final descent, Nyoka lets loose a bloodcurdling scream, and THEN?? To be continued next chapter ! Drat and double drat ! Darned cliffhangers !
Old Bongo has a tendancy to wax nostalgic about things like this, so I'll let the good folks at cultretro about this next thrilling chapter !
[ Statuesque beauty Nicola Rae returns as daring jungle heroine Nyoka Gordon as she once again battles the maniacal Crimson Skull for possession of the mystical Amulet of Vultura! When our heroine disrupts the villain's scheme to control the gorilla Satan, the Crimson Skull conspires to use the Amulet to resurrect Queen Vultura herself (the classic villainess from the original 1940's serial). The Skull requires a new host body for Vultura's evil spirit and he sets out to capture and use Nyoka Gordon for this nefarious purpose, but our intrepid adventuress isn't going to make it easy for him. An epic jungle chase ensues as heroine and villain exchange ambushes, punches, kicks and gunfire... all building to our big finale featuring Nyoka versus the Crimson Skull on horseback racing through the jungle!
This chapter (as with ALL serials) begins with opening title cards that explain everything you need to know to jump right into the story and enjoy this film even if you have not yet seen the others.
Serial fans are gonna LOVE IT! And if you're new to the cliffhanger genre... you'll love it too!!! Nyoka the Jungle Girl Rides Again is fast, exciting, sexy and fun... it's everything you love about comic book and serial adventures brought to life by micro-budget film mavericks Bill Black and JohnJG! Special Notes: We didn't want to make a sequel to our 2009 release The Return of Nyoka the Jungle Girl unless we thought we had a chance of making the next installment even bigger and better than the first. When the opportunity to film our serial heroine ON A HORSE fell into place, we knew this was exactly what we needed to kick things up to an all new level of excitement and adventure. Star Nicola Rae puts her stage combat training to good use and really takes her lumps in this one with an impressive display of physical acting that would make Davey Sharpe proud. We had her jumping out of trees in high-heeled boots, riding horseback, rolling head-over-heels on the ground and throwing kicks and punches like a world-class serial queen. Pierce Knightley also "rides again" and delivers the over-the-top goods as Nyoka's nemesis The Crimson Skull. You can't have a Nyoka serial without Satan the Gorilla and he is once again brought to life by professional gorilla man Chris Casteel. Erik Matthews joins the cast as the under-appreciated henchman Hunt Reardon. And introducing Autumn Sage as Rulah, a mysterious and enigmatic new adventuress with swashbuckling charm and ferocious fighting skills. Directors Bill Black and JohnJG channel the serials of old to create an all new thrill-a-minute adventure for one of cinemas most enduring action heroines. Don't miss it!]
Wow, what can I add to that ? This was a really fun project for everyone involved. We filmed on one of the coldest days of the year ( for Florida) so poor Nicola was literaly freezing her butt off, in her skimpy outfit.
Meanwhile,I was quite comfortable in 45 lbs of latex, fur, and padding ! This was quite a contrast to the first film, when it was over 100 degrees and I was dying in the suit !
I was happy about the lower temps because I was able to focus more on having fun with the character, and the subtle nuances involved rather than just trying to survive.
I think the fun we had shows through on film , as everyone really had a blast making it.
http://www.youtube.com/watch?v=txTOlC2AzRc&context=C38429c9ADOEgsToPDskJtAbV73jOsA1B1VwfxJMP-
Available now at ;
http://www.cultretro.com/nyoka_the_jungle_girl_rides_again_dvd.html