Crash, the Terror from Beyond Space! 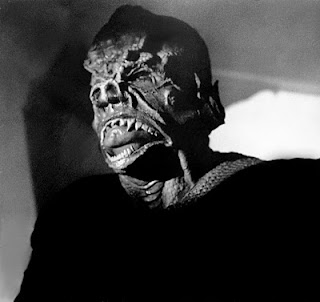 One of my favorite pastimes as a kid was the weekly viewing of "Creature Features", on Saturdays at Midnight , followed up by "Science Fiction Theater", on Sundays at 11:00 AM. One film that rotated on both programs was the classic "It, The Terror From Beyond Space."


Master monkey monster Ray "Crash" Corrigan played the title character in this fiendishly frightening flik! The human cast was led by heroic Marshall Thompson, with Shirley Patterson, Kim Spaulding and Dabbs Greer along for the horrifying fun.The rest of the cast are quite well acted, in this thriller that many have called the prototype for the movie "ALIEN".

As the story unfolds, a spacecraft is on a rescue mission to find survivors of a previous expedition to Mars. They find a lone survivor (Thompson) who claims that the rest of his party was wiped out by an unseen creature during a sandstorm. The crew of the rescue ship aren't buying it and blast off intent on turning old Marshall over for a court martial, and murder charges to boot! While cruising back to Earth, members of the crew start disappearing, and they soon discover that Thompson wasn't the only one that they up back on Mars. You guessed it, "IT"was aboard ! (cue scary music). Before you can say "Sigourney Weaver" panic was running rampant through the ship as the crew searched desperately to find the deadly nemesis before "IT" decimated the entire crew! The remaining survivors then......sorry, I'm not going to tell you, you've got to see "IT" yourself, if you dare !

But I WILL tell you about how Crash Corrigan became a monster from mars !.


Paul Blaisdell and Bob"Kogar"Burns, had the job of creating the beastly costume for Corrigan. They had asked for Corrigan to come to Blaisdell's studio to have accurate measurements taken to assure a proper fit of the costume. Corrigan instead sent a pair of his long underwear to Blaisdell as a guide. 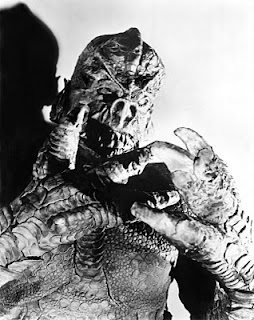 With a near impossible deadline hurtling towards them,(and unable to wait for Ray to change his mind), Paul and Bob stuffed the long underwear as best as they could and proceeded to fashion a suit on it out of hundreds of rubber pieces they had molded to simulate the creatures reptilian hide. Since they didn't have a life cast to sculpt the head on, Paul used the cast at hand (His own head !) to sculpt the fearsome features of the creature. When the suit was delivered to the studio, the real nightmares began. The suit needed to be altered substantially to fit Ray, who was a good deal bigger than the had imagined. The worst part was the head. Remember , it was sculpted on a cast of Paul's head. Paul Blaisdell, was a little guy, both in stature, and in build. On the other hand Ray Corrigan was a huge guy, well over 6' tall, and a stocky muscular build. When Ray tried to put on the head, he nearly destroyed in the process. After several alterations and adjustments, the head finally made it on, but the mighty Corrigan chin protruded out of the mouth. Paul's solution was ingenious as he quickly fashioned a set of lower teeth that covered the bottom of Ray's chin, then he painted Ray's chin red to look like a tongue.
Bob related to me his memories of following Ray around with a can of contact cement, to constantly repair the damage to the suit from Ray going full out destroying props, sets, actors, etc. The production caused a lot of grief for Paul as he did a lot of extra work to help out Ray Corrigan, (including building a separate arm for the monster, so Ray didn't have to wear the whole suit when only the arm would show.)
Even with all this effort put forth by Blaisdell, he was eventually not allowed on the set, per some union regulation , and Bob was left to attend to the repairs on his own.

But despite all the traumatic goings on behind the scenes, "IT" still remains a true classic of SCI-FI cinema !