A BULL IN MY MAILBOX 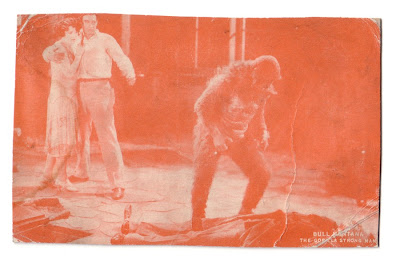 On a typical evening of Ebay trolling, I was checking out listings for a Golden Age Gorilla Man who has only 2 known screen credits for suit work and came across an intriguing Ebay handle. Fred Humes was a silent star of cowboy flicks whose career faded out quickly after the transition to sound (more on Fred in the future). He was a significant presence in his day but once he walked away from Hollywood, Fred dissapears from the history books. Occasionally the odd still from LORRAINE OF THE LIONS or CIRCUS ROOKIES (the pair of aforementioned gorilla roles) come up for sale and but generally Hume's ephemara consists of arcade cards and stills from his Western work. A rountine check on an auction revealed a bidder who had the very Humes name as a part of his username - I thought either this person is a big fan or better yet, family! I contacted the bidder and was thrilled to discover that he was in fact a distant relative. Steve Humes resides in Florida and is a musician by trade - he has been a delight to correspond with and recently sent me an arcade for another gorilla man, Bull Montana. It just arrived in the mail, and with my review of Gary's article still fresh, I figured it would be a great time to share the image. I have come across the card in my Ebay travels but it's great to have one to paw over. The scene is from THE LOST WORLD, one of his several ape-man roles. My thanks to Steve for the arcade card and for the Classic Images article about his mysterious kin.
Steve has set up a MySpace page for both himself and Fred Humes. Check them both out!

Being far from infallible, this gorilla suit scholar was off the mark on the arcade card subject matter. A friendly chap by the name of Tony emailed me about his doubts of my identification but we could not settle on a possible correction. A note from Gary Prange settled the issue - the scene is from VANISHING MILLIONS.
Posted by Gorilla Man at 2:09 PM