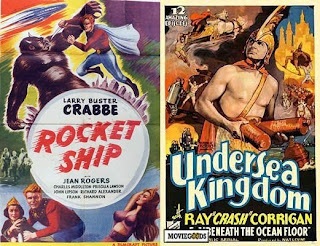 When UNDERSEA KINGDOM was released in late May 1936, the public would have strolled past the marque and pondered " Crash? Is he supposed to be like Flash Gordon?". Possibly capitalizing on the moniker association, Ray Corrigan first had the catchy 'Crash' shoehorned into his name with this 12 episode serial from Republic. Over the years it was also implied that the nickname was a result of Corrigan's stuntman background but the timing of it's initial use makes me think otherwise.

UNDERSEA KINGDOM attempted to rival the popular Universal serial FLASH GORDON  with a similar tale of a dynamic, athletic hero taking on a Oriental-type despot. Instead of the planet Mongo, our intrepid adventurer travels to the bottom of the ocean in an atomic submarine with crew consisting of a scientist and his young son, a fetching lady reporter, and trio of other sailors.

Once in the undersea kingdom, 'Crash' faces off against the evil Unga Khan who seeks to dominate both Atlantis and the world above. Fun stuff includes the mechanized landcraft, the Juggernaut and the robotic Volkites (which were later recycled into one of the ROCKET MEN serials). Lon Chaney Jr. also makes a surprising appearance as Khan's chief henchmen but does little to distinguish himself in the role. The serial is moderately entertaining and features some decent action but fails to be as bold as FLASH GORDON.
Ray 'Crash' Corrigan may not have outshone Buster Crabbe as sci-fi serial star, but some months earlier he very nearly killed Flash in the Arena of Death. Appearing as an alien Orangapoid, essentially his 30's suit with a wobbly horn attached to his head, Corrigan had a cliffhanger tussle with the Earthman. The fight scene is well executed and for a gorillaphile like myself, the lengthy, well-lit episode provides a good look at his suit. Reviewing the serial for some image captures I was particularly struck by the way the nostril area pulsated with Corrigan's laboured breaths - whether it's by accident or design, it certainly enhances the performance.
One last aside - early gorilla man Bull Montana also has a role in FLASH as a 'Monkey Man'. Unfortunately, the 'Monkey Man' makeup consists of ridiculous fangs sprouting from his lower jaw.
Here are a few image captures from a dvd set I recently purchased from VINTAGE HORROR DVD. The image and sound quality are decent - naturally there are some flaws inherent in material of this age but this print had few moments that were particularly rough and none that detracted from the experience. The serial is available with or without clamshells with artwork and were sent quickly. It can be difficult to find a small operation with dependable service and material but VINTAGE HORROR DVD has made me a loyal customer. He has an impressive catalogue of classics, rarities and oddities and I heartily recommend you check him out.