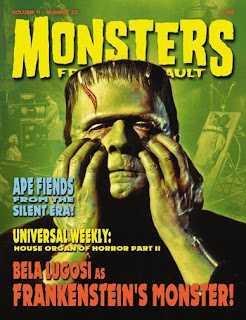 In my eternal search for information on gorilla suit actors and their films, I have been confronted by the utter lack of serious print coverage from classic horror journalists. When there is a story or two about these films it is usually a top ape film list poking fun at some of the many gorilla suit B-movies; not that I have an issue with that - most of the films are dreadful (and enjoyable for that very reason). Naturally there are exceptions - Bob Burns has spoken to Tom Weaver at length about Charles Gemora and Ray 'Crash' Corrigan, providing a first hand account of two premium gorilla men. The surge in special effects fascination and the use of 'Behind the Scenes' coverage to promote film has also guaranteed that post-Dino De Laurentiis’ KING KONG ape films are thoroughly reported on.
Gorilla suit cinema from the Golden Age of Hollywood, however, has been particularly difficult to find information on. Through my Ebay hunting, I have managed to find a 30's article on Gemora's involvement in the infamous inter-species romance exploitation tale INGAGI, but little else on the significant number of films from this period featuring simians.
Before Christmas, I was thrilled to hear of an article in the winter issue of MONSTERS FROM THE VAULT that promised to throw a spotlight on this era. Author Gary L. Prange is a cornerstone of the CLASSIC HORROR MESSAGE BOARD and a major genre writer. A two part excerpt from his upcoming book, SYMPHONY OF HORROR: HOW THE HORROR FILM CAME TO BE is featured in MFTV and the article title, APE FIENDS OF THE SILENT ERA had me eagerly awaiting it's arrival in the mail. With my expectations relatively low (rare film research is often limited to plot summaries!) I was floored by what Gary has assembled. 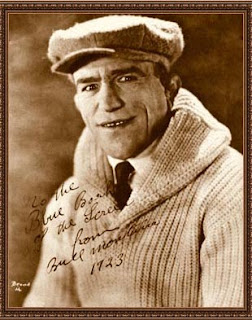 Part One of his article focuses primarily on the 1920 film GO AND GET IT starring Bull Montana as a murderous apeman. The depth of the material on the adventure/horror picture is more thorough than I thought possible and illuminates how significant the film was to 20's viewers. In addition to the requisite plot summary (which is the most detailed I have read), Mr. Prange explores the production and the subsequent impact on the public. Evolution was a major hot button issue when GO AND GET IT premiered, and the audiences flocked to see the gruesome creature that blurred the line between man and beast.

Critics were also enthusiastic about the film, supported by several period reviews and telegrams quoted for this article. The positive press on GO AND GET IT was certainly aided by the central character of the drama, a heroic reporter who battles not only the horrific beast-man but bureaucratic corruption as well. Special screenings and other clever enticements, near guaranteed a thumbs up from the press.

"All reporters should make a point of going to see it. It is a good [sic] entertainment and excellent melodrama. It has plenty of thrills and the story has ingenuity and originality"
- New York Telegraph 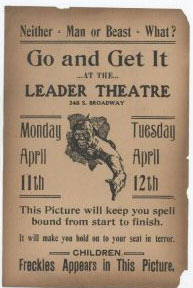 The promotion of the forgotten blockbuster also receives fantastic coverage in Mr. Prange's article, and it is amazing to read of the various intricate stunts and creative efforts to create word of mouth excitement. Mr. Prange recounts the scheme cooked up by theatre manager in Creston, Iowa

"...On dusky evenings, a few citizens began to catch glimpses of a creature described as "half-man-and-half-ape". It appeared only at twilight and invariably was spotted by only a few people, occasionally resulting in genuine fright but no one could get a good description of the beast. Word began to spread, but some citizens would not accept the notion their town was the home of a lurking monster resembling an ape. That changed one evening when the beast "appeared on top of the most prominent building in the city, hung over the edge for just a moment, uttering strange cries and then utterly disappeared." The streets were filled with people that night, and a search for the monster failed to produce any trace."

When GO AND GET IT opened a few days later, the manager placed an ad claiming to have caught the creature and a promise to display it in conjunction with the regular show. Apparently the stunt was a success with the house filling to capacity.
Accompanying the article is an assortment of extremely rare photos and promotional material I have not seen elsewhere. All pics that appear with this review are from my files. 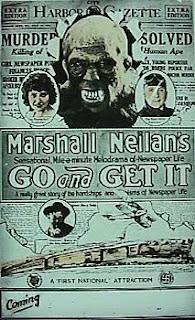 Part One of Gary L. Prange's article contains a wealth of information about GO AND GET IT, a film that is generally relegated to a footnote in other texts I have read. In short, it is a stellar addition to the tapestry of simian film history. To have this information so accessible is tremendously exciting. Knowing the efforts I have gone to personally to hunt for any scrap about the subject matter, I am in awe of the scope of Mr. Prange's research. It is thorough, engaging and free of the superfluous details that usually pad out an article of this nature. Two other productions, VANISHING MILLIONS and A BLIND BARGAIN are explored but do not receive the impressive attention lavished upon GO AND GET IT.
I eagerly anticipate part two which will cover National's THE GORILLA and THE WIZARD, both of which have had little written about them to date.

APE FIENDS OF THE SILENT ERA was the hook that persuaded me to sample MONSTERS FROM THE VAULT, but after reading the other features it is clear it is superior to other genre mags I have purchased at the local shops. The layout is a nice balance of style and substance, eschewing a trend I have noticed of 'Chip Kidd'ing material to the point of near visual insensibility. The stock is beautifully slick and presents the stills and other pics in an optimum fashion. I heartily recommend this magazine and encourage all to visit the VAULT site for ordering information. The next issue of MFTV promises to be doubly thrilling for me; in addition to Part Two of APE FIENDS, Tom Weaver will be speaking to Bob Burns about another Gorilla Man shrouded in mystery, George Barrows. My deepest thanks to James Clatterbaugh, Editor/Publisher of MONSTERS FROM THE VAULT for providing a venue for this material.

You can also learn more about the history of MONSTERS FROM THE VAULT at MySpace.