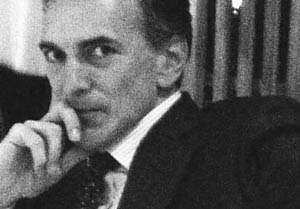 In this big ol' world of over stimulation and tightly packaged culture, it is rare to stumble upon some raw gem that speaks to your heart. On MySpace, there is a massive community of the Arts that have an opportunity to let their efforts be experienced by strangers around the globe. In my first couple weeks on the site, a gentleman politely suggested I might find his song to my liking (something to do with the subject matter;-). With a title like KING KONG TONIGHT, I had an inclination it might be amusing but I was unprepared for how completely charming it revealed itself to be. My musical taste runs along many divergent paths (NO COUNTRY!) but as of late, I am enamoured with 50's and 60's library and lounge music. Rhoderic Land's tale of bittersweet romance is created from retro cloth but is tailored with sharp modern wit. I love this tune - so much so that I strictly prohibit myself from sequential plays lest I spoil my ear and grow tired of it (a rule I broke for tonights post).
I have had a few communiques with this mystery man and he recently agreed to answer a few questions about his infectious song and the voice behind it. 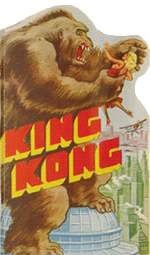 “Rhoderic Land” is an assumed name for my musical work. I otherwise work in finance, I’m British, and I’ve lived in Paris since 1993.

Songwriting has been a lifelong reflex, although “King Kong Tonight” is the first piece that I’ve really allowed ‘out of the house’.

The song began about a year ago, inspired on an evening walk beneath a purple moon. There were peacocks in the park and their sunset cries reminded me of apes in a jungle.

And so, back at the piano, “The monkeys go bananas for the moon gone down” got inverted into the opening line and the rest was like taking dictation. It was finished in twelve minutes and not a word or a chord has been altered since.

Each line suggested the next, and the story emerged on its own.

The recording, however, took six months. For the myspace version, I’m playing all the instruments and singing the three vocal parts.


From listeners, two of my favourite comments have been:

and from a young girl in England:

“It’s actually quite a sad little story, isn’t it?”

I was very touched by both of these. Yes, it’s happy and fun, but there’s also a sadness for something lost as well; a secondary theme in many of my songs.

Yes, I am working on recording some other recent pieces to put onto the myspace site; some mainstream ballads.

Ever worn a Gorilla suit?

No, I never have, but one’s on order.


And with that, I give you KING KONG TONIGHT. 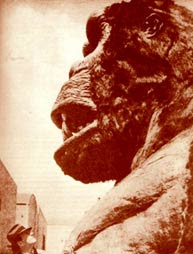 You can also download the song and check out Rhoderic's MySpace page here.
Posted by Gorilla Man at 11:08 PM