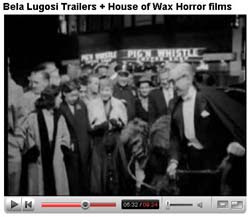 When it rains it pours – and the past day on Vancouver Island here we have seen a months rain some places. Considering that Steve Calvert is one of the lesser covered gorilla men (no reflection upon his talent!) I was thrilled to discover the 2 pager on him this week. When I posted the wonderful pictorial, I had to email Ted Newsom who penned CONFESSIONS OF A HOLLYWOOD GORILLA and let him know. Ted informed that me that Steve had mentioned there was only one article published about him other that the one readers here enjoyed recently. He also passed along a YouTube link that he had seen on the Classic Horror Message Board. In the ten minute segment, around the halfway point, the HOUSE OF WAX appearance that he had wrote of is represented by a newsreel. (UPDATE July 30th 2008 - new clip only features Bela and Steve arriving in the first minute of the clip.)

Gorilla suited performers were a staple of B movie promotions for local theatres – an inexpensive and sensational way to titillate the audience. ‘Spook shows’ became commonplace during the horror revival of the sixties and a jungle menace often terrorized moviegoers. In the gorilla suit fandom must-have, HOLLYWOOD GOES APE, Bob Burns spoke of a MUNSTERS promotional tour that he tagged along on. In full ape regalia, Bob was lead by Eddie Munster, snarling on a chain through an airport crowd while police apprehended a suspicious boy in attendance. Apparently the young lad had a cup of acid he had intended on tossing in Bob’s, er, Kogar’s mug. He was curious how the ape would react. And they say kids today are not quite right.

Diana Gemora, Charlie’s right hand girl, had this anecdote about a promo appearance that went south due to the authenticity of Gemora’s suit.

Speaking of promos. In the 20’s and 30’s, the Studios and individual producers put on great promotions. A funny one was when Charlie had to promote a "Road" flick. Dorothy Lamour and he were stationed on Hollywood and Vine to sign autographs. Well that was Dorothy’s job and Charlie’s was to be in a cage. Dorothy wore a fur coat over her sarong seeing as how it was winter, in those days we actually had them. Charlie, on the other hand, was sweltering in his suit.

Everyday a little ole’ lady would come and look with pity at Charlie. He was trying to be fierce. She’d just shake her head and walk away. After 4 days of this, she could stand it no longer and complained to the Humane Society that the Studio was being mean and cruel by freezing this poor gorilla and it was indecent for him to be NAKED on top of that.! On their last day he was forced to keep a blanket around him. She almost killed him with kindness and decency.