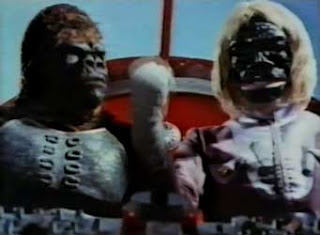 Perhaps one day I will actually get around to covering a real gorilla suit classic, like THE MONSTER AND THE GIRL or BRIDE OF THE GORILLA, but for now I want to share with you another strange and twisted entry into the pantheon of gorilla suit entertainment. Now mind you, this is not technically a straight up gorilla suit appearance, but it is simply too weird and wonderful to pass up commenting on.
SPECTREMAN was a 1970's Japanese kaiju kiddie program that featured an android superhero from outer space that routinely thwarted the evil machinations of the simian Dr. Gori and his henchman, Rah. The villains seek to dominate Earth and destroy mankind before we make the planet uninhabitable by our reckless polluting. The environmental angle is very strong and apparently figures into the plots of all the shows. The episode I enjoyed opens with Dr. Gori snatching an Earth gorilla from the zoo, whom he transforms into another flunkie. Rah isn't too pleased by the addition to the ranks but apparently his recent tangles with Spectreman haven't gone well. The new and improved gorilla goon Karis is only one spoke in the wheel of doom! True to the environmental angle, Dr. Gori plots to use pollutant derivative goo fumes to murder the inhabitants of Tokyo. After an initial test on a security guard that proves deadly, Spectreman collects some soil samples (?!) in an effort to track down the furry fiends. In a bid to distract him from the search, Dr. Gori sends a gigantified Karis to do battle with Spectreman, who can also increase his size. Some mediocre Kaiju scrappin' follows, though there are a few Kong inspired moments that are good laugh. The conclusion of the battle is never in doubt and Karis is summoned back to homebase to face the profound disappointment of Dr. Gori. 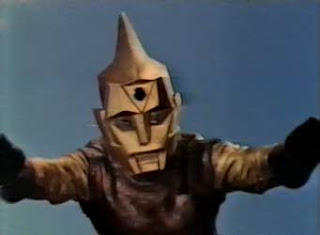 The evil ape genius later snatches a family that is near and dear to Spectreman (though to them, he is known in his human guise as 'George'), and subjects them to a procedure that makes their very presence toxic to everyone. The 'pollution people ' are returned to their home, unaware that anything has been done to them. It's not long before the first hapless victim crosses their path and collapses in pollution induced agony. Spectreman's alien overlords realize what Gori has done and dispassionately order the hero to snuff out the family. Spectreman finds he is unable to complete the grim task and instead tries to find a cure after containing the family in their home. Dr. Gori sends Kah down to create more havoc, and the evil ape nabs George's gal pal Rita and tosses her in with the foul family. Spectreman is once again called upon to destroy the innocent plague bearers. With Rita in danger, Spectreman acquiesces to the request, charging into the family's home. Human weakness is the undoing of the hero yet again as he succumbs to a child's plea for mercy. Unable to tolerate his impudence, the alien masters strip the hero of his powers and decide to exile him to a distant planet. As he drifts through space, both Kah and Karis pursue him, decked out in inflatable bubble helmets. The apes kick his defenseless shiny metal butt around until they reach his final destination....and then they kick it some more. Displeased with the notion of an unfair fight, Spectreman's masters free him from his powerless state and offer to return him to Earth if he vanquishes his foes. Needless to say, gorilla fur flies and soon our hero is racing back to the apartment. It appears that Spectreman is about to fry the infectious family when he is stopped by the voice from above. A cure has been found and the family no longer must be vaporized. 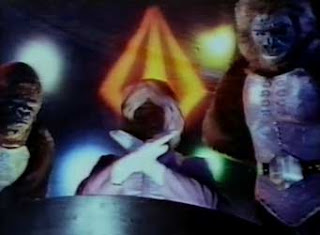 For an hour long kid's program I was impressed with the ambitious scope of the tale. It's definitely low budget B-movie material but the time constraints keep it from getting dull. The villainous Gori is completely bizarre with his blond locks, soft pink lips and purple leisure suit. One surreal aspect of Gori's performance is the continual hand gestures! Throughout every moment of dialogue, the gorilla is gesticulating; crossing his arms, raising his fists, swinging a thumbs up from one left to right. I can only surmise that the series creators thought the hand gestures would make him somehow more alien.
If you’re into pyschotronic children's programming with a message I heartily recommend checking the show out. I imagine it must be available on DVD somewhere, but I came across the episode on mininova. I'll leave it to you to decide if bootleg downloads is the route you want to take.


Clip from TERROR OF THE POLLUTION PEOPLE with an extended Spectreman vs Gorilla sequence.

Very odd clip with Gori cruising the downtown wearing a floppy brim hat and a caplet/shawl before heading off to the local disco to grove with some hip Japanese girls.
Not from the episode I reviewed.