Trick or Treat ! Hiya folks ! This installment of our Hairy Horrorthon Halloween Countdown is most definitely a treat ! What better treat than a little Mad Science ? Well friends, it doesn't get any madder than the science in The Monster and the Girl ! 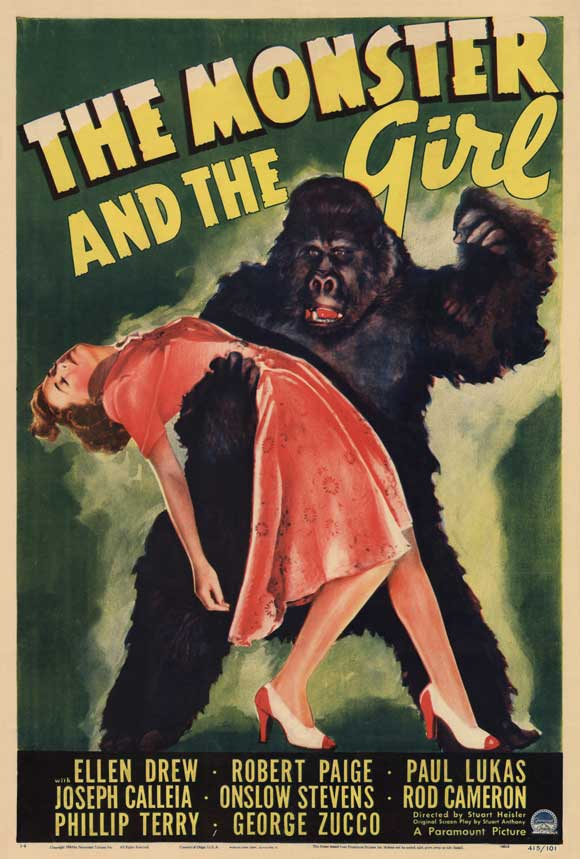 Monster and the girl is a bit of a hidden gem in the Universal vaults, as it was far out shined by the classic monsters in Universals stable.
For every Frankenstein, Dracula And Wolfman, Universal had lesser titles like Murders in the Rue Morgue, Man Made Monster, and Monster and the Girl.
The production values of Monster and the Girl are excellent. The cast is exceptional and includes the likes of genre veterans Paul Lucas, Joseph Calleia, Onslow Stevens, Marc Lawrence, Gerald Mohr, and the maddest of scientists, George Zucco !
The Story is very dark in subject matter, dealing with seedy underworld doings, false imprisonment, and a woman being forced into prostitution. As much of a downer as this is, it is important to the set up of the plot.
You see, The evil gangster boss, W.S.Bruhl ( Paul Lucas) has framed Scot Webster (Phillip Terry) for a murder he didn't commit.
A few well placed bribes later, and poor Scot is found guilty as charged.
With his execution looming closer, Scot is approached by the seemingly kindly Dr. Parry. (George Zucco) Parry makes a deal with Scot to remove his brain after the execution for science....Mad Science !
Back in the lab, the good doctor has a monstrous gorilla !(Charles Gemora)
Old Doc Parry comes home, Jar in hand and dumps poor Scot's brain into the newly emptied gorilla noggin. 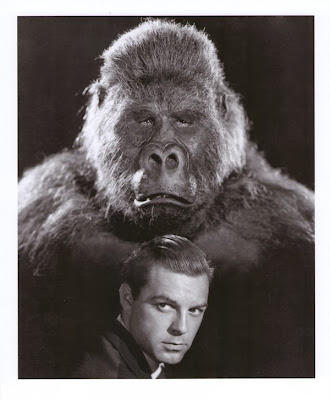 While all this is going on, Scot's Sister Susan is drugged and duped into the seedy world of prostitution by W.S.Bruhl and his twisted slime-bag confederates.
After a fashion, word starts to get around about Bruhl's doings and it gets back to Gorilla Scot. 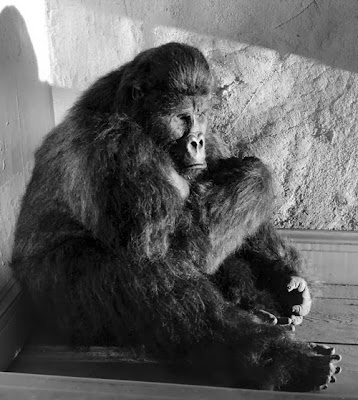 Being not just an average monkey, Scot escapes his cage and begins a vengeful game of cat and mouse with Bruhl's goons.
One by one, the thugs meet a gruesome demise by having every bone in their bodies broken.
The press dubs the mysterious killer "The Mangler", and after another on of Bruhl's men winds up the same way, they start getting a little panicky. There is a brilliant scene with Marc Lawrence having a full blown panic attack, "I don't wanna get mangled !I don't wanna get mangled !"...I won't spoil any more for you, as I hope this really wet your Apetite to see it!

Now for the good stuff !
The gorilla in this movie, is widely thought by gorilla man, and ape suit fans, to be the best gorilla suit ever put on film up to that time. I'll go it one better, by telling without doubt, that it was the best suit, up until Rick Baker hit his stride in the 70's ! It's that good ! 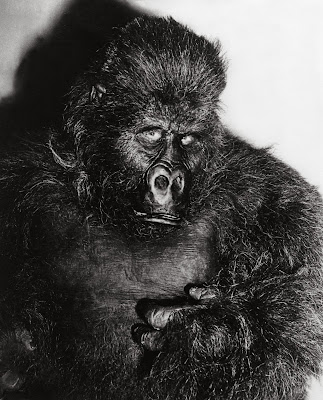 It was created by the great Charles Gemora, using reference photos and studies of real gorillas.
The suit was revolutionary, in the fact that Gemora incorporated bags of water under the skin to give realistic sway and heft to the gorilla as he moved...And what movement ! Charlie was beyond a doubt the best at acting like a real gorilla. Every movement exactly mirrors the movements of the real animal. No monster performance here, Charlie went for realism and it shows ! The lighting and atmosphere in Monster and the Girl is top notch, with narrow glints of light catching the gorilla from dynamic angles giving a surreal effect to the ape. The close-ups of Charlie's magnificent gorilla are perfect, and don't come off as "mask-y" at all...It looks real ! 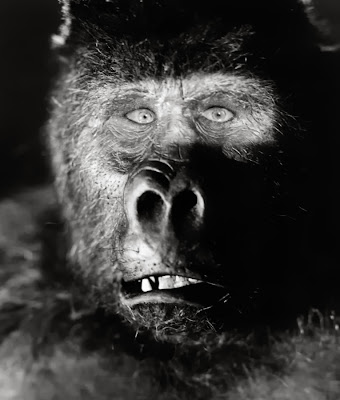 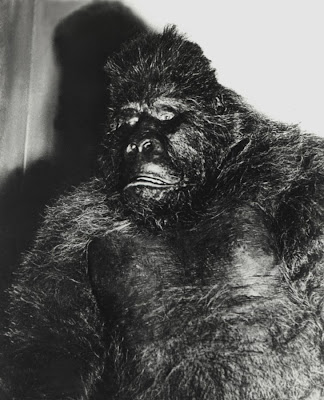 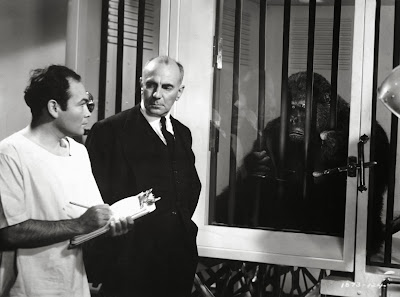 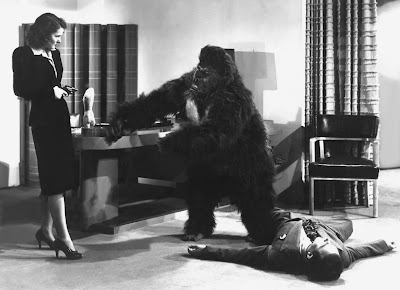 This is a super rare behind the scenes shot of Charlie taken during filming. Pretty damned cool ! 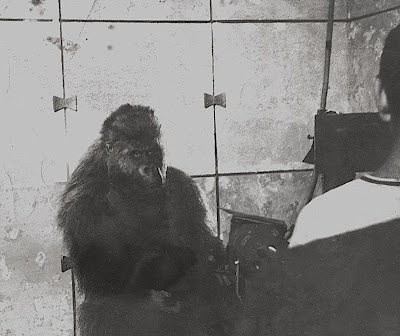 So give Monster and the girl a spin and see for yourself why this is the best ape ever !
Hows this for a Tricky Treat !