Did someone say...SATAN!
The Church Lady is forever etched in my mind anytime the name of the Great Nemesis is mentioned. Today's entry is another Golden Age Gemora Gorilla - this time with man himself portraying the devilish ape. The text below is cannibalized from a post I made 6 (!) years ago but hey- I'm old and I gotz 2 kids!

I have added a few videos and the time where Gemora menaces the pasty faced 'hero'. 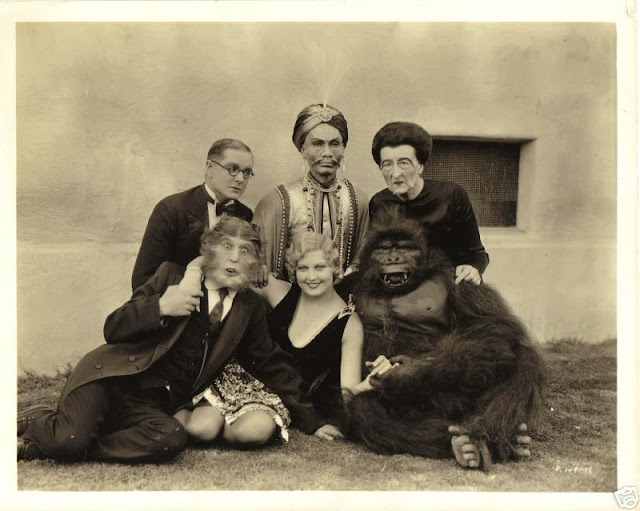 The voluminous pages of THE MISSING LINK website have this to say about the early Hollywood effort of the Great Dane:
Daredevil Jim Kirkham, complains when he feels that his life is too mundane, until he and his sweetheart find themselves prisoners in a haunted castle while searching for a gemstone stolen during a reception at her house. The castle is inhabited entirely by monsters, wild animals and screaming victims, but eventually the horrors are revealed to have been nothing more than an elaborate hoax to show him that mundane reality can be as bizarre as any adventure.
A thrilling parade of monsters in a startling symphony of light and shadow, invested with a darkly mocking wit. SEVEN FOOTPRINTS is overloaded with impressive horror makeup faces, interesting characters and visual surprises. One brief (pre-code) scene shows a naked oriental woman (we only see part of her). Her hands are then bound above her head with leather straps while the gorilla holds her feet! A hairy faced man (William V. Mong) who I think is a werewolf and a bearded dwarf (young Angelo Rossitto) both help the hero. A witch woman in a sexy dress (Nora Cecil) and a club footed cripple with long hair (Sheldon Lewis, who was DR. JEKYLL AND MR. HYDE in 1920) both threaten. Also with the director as Eve’s uncle and Loretta Young (an extra). The director, best known for his incredible WITCHCRAFT 2 THROUGH THE AGES (22), also made THE HAUNTED HOUSE (28) and HOUSE OF HORROR (29) in Hollywood, both also with Todd and Mong, before returning home to Denmark. Todd, famous for 30s comedy shorts, died of carbon monoxide poisoning in her car in 35. The Japanese Kamiyama Sojin (also in THE BAT - 26) died in 44 in a U.S. internment camp. Hale, from Ireland, retired after the 40s and lived into his 80s.