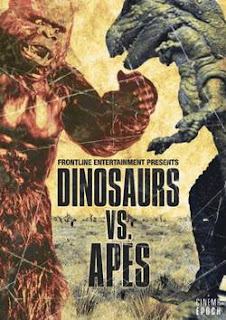 Well, better late than never! The long awaited (by me anyhow) arrival of HOLLYWOOD GOES APE! is almost here. The documentary that details my favourite obsession, gorillas in cinema, was the creation of the multi talented writer Don Glut and features the hosting talents of Bob Burns. For any simian cinema aficionado, the 1994 production is an absolute must-have, chock full of clips and stills I have not seen reproduced elsewhere and the viewer is also treated to Bob's remembrances of his career as a Hollywood gorilla man.
Another Glut doc, DINOSAUR MOVIES, focuses on his primary fascination, prehistoric beasts in film and I look forward to seeing it for the first time.
It's a damn shame the DVD could not be released this past October thus capitalizing on the casual interest of persons looking for some inexpensive Halloween distractions. With a November 6th release posted on Amazon.com and a later release on Amazon.ca this November 20th, the title will still be scooped up by other classic horror and sci-fi freaks like myself but the average Joe will likely pass it by. Although the presentation of the material hearkens back to a less commercial time, HOLLYWOOD GOES APE! holds up well due to the quality of research. I let the occasional groan slip when watching Bob trade quips with his shapely co-host Ashley Austin, but it is strangely refreshing to watch something so earnest.
You can pre-order from AMAZON.CA or AMAZON.COM
Posted by Gorilla Man at 10:31 PM