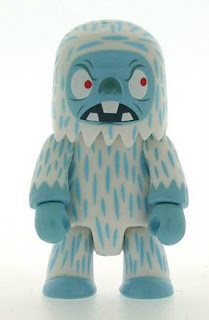 No matter how strange you think you are, there's always someone else out there to remind you that abnormality is the norm. Recently I mentioned to some co-workers that I had a site called Gorilla Men which celebrated the art and craft of gorilla suit performance and construction. As the laughter died, one fellow exclaimed, "Holy crap! He's not kidding!", pointing at my latest entry on his laptop. Now bear in mind I work at a car dealership where 95% of the guys there naturally have gears for brains and don't typically have interests as left field as my own. However, I must admit I was momentarily taken aback by the stunned looks on my chum's faces.
Back to my opening statement, during a recent Google image search for simian oriented pics, I was surprised to discover a blog dedicated to the our Himalayan distant cousin, the Yeti. At least I think they're indigenous to that stretch of mountains? Damn sure it will mention the answer to that question and a hundred others you never knew you had about that snowborn twin of the Sasquatch. The blog is stunning in it's dedication to the subject and the depth of material it offers on a regular basis. I had no idea that the Yeti had such a cultural resonance in the 21st century.
The trio of lobby cards accompanying this post are from HALF HUMAN, an abominable snowman flick that has some very strange suits that fall into that oddball WTF-is-it category shared with the Sloth from UNKNOWN ISLAND and the Orangapoid from FLASH GORDON.
Here's a link to I LOVE THE YETI (yes you do!).